During the Era of Upheaval, the Forest of Amtar was about 400 miles (650 kilometers) long and roughly 150 miles (240 kilometers) at its widest point.[4] Centuries and millennia before, it was much larger.[6] After the Spellplague, the Underchasm swallowed a portion of the forest and surrounded it on the west, north, and northeast sides. The Gnollwatch Mountains formed the forest's southern border. The River Ammath had its headwaters in Amtar and flowed eastward out of the forest.[5][7] The River Dambron also began deep in the forest and flowed out southwest and around the Gnollwatch Mountains.[7]

The Amtar Forest formed the northern border of the nation of Dambrath covering nearly half of its land area.[8]

Before the Spellplague, the Landrise cut into the northeastern part of the forest,[9] but the cliffs ended before reaching the other side.[4] The eastern part of the forest hid many stone ruins of past cities, built by human-sized inhabitants as well as giant-sized, that made for break-neck drops and break-ankle ditches covered by profuse undergrowth.[1][2]

This lush forest was extremely hot and humid, with temperatures typically above 90F (32C) even during the night,[8] for most of the year. The majority of trees were suthwood[note 1] which intertwined with each other to form nearly impenetrable barriers in the densest parts of the forest. Interspersed among the suth were tall shadowtops and slightly shorter pine trees, all towering over a thick underbrush made of ivy, climbing vines, and brambles like living, leafy spider webs clawing their way upward.[1][2][10]

The canopy and clinging vines blocked most of the sunlight from reaching the ground, creating a green gloom in the understory.[10] The floor of the forest was typically covered with dead leaves to a depth of at least a foot (thirty centimeters) that decomposed in the damp dark to form rich but smelly black soil.[1][2]

While many of the vines that clung to the canopy were innocuous, the Forest of Amtar was riddled with choke creepers[8] and had large populations of assassin vines and ropers as well.[1][2] The constant heat and humidity made it a perfect habitat for crawling and flying insects,[10] including giant beetles such as the giant rhinoceros beetle.[8] Many species of snakes and lizards were at home in the Amtar, including giant varieties.[8][10]

Many jungle mammals could also be found within the forest: jaguars, leopards, and tigers prowled the underbrush; wild boar were fairly common; monkeys, gorillas, and carnivorous apes made their home generally in the northern half of the forest, but packs of dire apes and girallons could be found wandering the entire Amtar. Tropical birds were also well represented in the Amtar, including parrots and macaws.[8][10]

Wildlife was so abundant in the Forest of Amtar that Elminster, the Sage of Shadowdale, speculated that the forest contained active portals that allowed creatures to wander in from other places and/or several deepspawn with a nearly endless food supply.[1][2]

The Trunadar (or "star people", as they called themselves) were a group of few hundred wild elves, led by their shaman Ferla Treerunner, that lived in the southern center of the forest. They were in occasional conflict with the dusk elves of Dambrath who sometimes hunted them for sport, and the Quinix tribe[8][11][12] of gnolls that inhabited the southwestern part of the forest around the Gate of Iron Fangs.[1][2][8][10]

On the northern and eastern edges of the forest, several groups of organized bandits preyed on travelers and caravans along the Trader's Way. In the mid-to-late 1360s DR, these included a group of outcast Arkaiuns, a band of orcs led by an ogre mage named Tandi Earsgone, and an evil adventuring company known as Dracil's Raiders.[8] By the early 1370s, the orc band and Dracil's group had been eliminated or scattered and newer groups, such as the all-female Raunstrar and magi-centric Maurvurr had moved in.[1][2] A ragtag group of humans, half-orcs, and ogres plagued the road between Channathgate and the Landrise. This group may have reformed under Tandi Earsgone because the leader was an ogre mage calling himself Tandith Tornears.[11][speculation]

Some of the giant snakes in the Forest of Amtar (and elsewhere) were blessed by the god of serpents, Sseth, and these cunning and intelligent beings were known as elder serpents. In the Year of the Serpent, 1359 DR, the rival god Set attacked Sseth, bound him, and took over his portfolio and the worship of his elder serpents.[13]

At some point in time a group of chokers from the Underdark somehow made its way to the Amtar Forest and acclimatized to live in the heat and the gloom.[1][2]

As of the Year of Lightning Storms, 1374 DR, an adult male mercury dragon named Trinculo made his home here.[14] 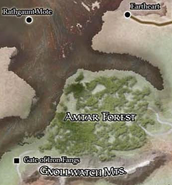 The forest after the Spellplague