Use the following template for a nicely presented post:

Dagger boots are an adventuring item mentioned in Aurora's Whole Realms Catalogue, in 2e, and there are no stats listed, in my campaign, or rather the campaign Im in, and I paid 20 gp plus giving the blacksmith 2 shortswords and a pair of boots to commission a pair, but im not sure what damage stats i should give them, and if an attack from close range would count as a bonus action, any advice would be appreciated. 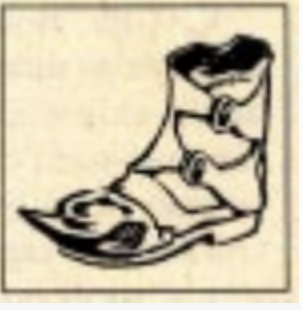 —Preceding unsigned comment added by Uberfeld (talk • contribs)
I'd personally roll the damage normally inflicted by a shortsword in the edition you're playing (I'm guessing it isn't 2e, since that edition has no "bonus actions" AFAIK). Relevant mechanics relating to surprise attacks might apply as well.
— Look-a-troopa (talk) 17:29, March 29, 2020 (UTC)
It is up to your DM to tell you what damage stats they should have. In second edition, they did 1d4 piercing damage.
—Moviesign (talk) 17:43, March 29, 2020 (UTC)
Blade boots also appeared in the 3e FRCS. They also did 1d4 damage, same as a dagger, with a various other benefits (treating them as unarmed, as concealed weapons, etc.)
— BadCatMan (talk) 01:49, April 3, 2020 (UTC)
The upper right corner of page 8 in Aurora's Whole Realms Catalogue literally has the damage listed.
Artemaz (talk) 13:32, April 28, 2020 (UTC)
The bonus action is for Monk abilities with unarmed combat. I'd say it is a surprise attack. The 1d6 seems a bit much for such a short blade, so I concur with the 1d4. Decrease the cost of boots for dagger costs. The question is whats your opinion on poison in the boot blade because surprise attack with injury poison & possible poisoned status is awesome!!!
Gothrog Gothrog (talk) 03:26, April 30, 2020 (UTC)
Retrieved from "https://forgottenrealms.fandom.com/wiki/Forum:Dagger_boots?oldid=544127"
Community content is available under CC-BY-SA unless otherwise noted.
FandomShop DC Trivia GalaxyQuest