30 ft (9.1 m)
A galleon was an advanced sailing vessel, the largest used by Cormyr, Impiltur, and Sembia as of the Year of the Serpent, 1359 DR. Even in these relatively wealthy countries, the galleon was not a common sight on the Inner Sea.[2]

Typically 130 feet (40 meters) along the keel and 30 feet (9.1 meters) across the beam, galleons had three full masts and three decks that could hold a maximum of 800 crew and passengers. With multiple sails and complex rigging, it took a minimum crew of 80 to operate proficiently. The galleon had castles at fore and stern that were usually armed with a total of three large weapons (ballistae or catapults, for example).[2]

Galleons were quite seaworthy,[2] but were relatively slow and difficult to maneuver. Because of significant weight in the structures mounted high above the waterline, prudence was required to avoid capsizing.[3]

Among "groundling" humans, a galleon was the vessel most likely to be converted into a spelljammer, a spacefaring vessel, by mounting a spelljamming helm on the craft.[4] One such craft from the time of the Netherese Empire was preserved after that nation's fall in the desert of Anauroch within the ruins of Hlaungadath. As late as 1358 DR, the lamia living in the ruins could not figure out how to operate the ship and make it fly again.[5] 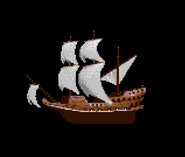 A galleon, as depicted in Spelljammer: Pirates of Realmspace.