Gar Shatterkeel was the Prophet of Water and the leader of the Cult of the Crushing Wave.

His skin was covered in barnacles, and his left arm was replaced by a large mechanical crab claw. He wielded a magical trident known as Drown.

Gar was born in a poor fishing village in the Nelanther Isles. When he was young, sahuagin attacked and slaughtered everyone in the village; soon after, he was conscripted by a Tethyrian merchant galley and grew up in brutal indentured servitude that was little more than slavery. When the ship was destroyed by pirates, he clung to the wreckage for days until a shark ripped off his left arm. He finally gave up all hope and accepted his imminent death, but a strong current carried him away from the predator to the shores of the Sword Coast.

Believing that the sea itself had saved his life, he spent the next several years devoting himself to studying the ocean, learning powerful water magic. His harsh experiences with both the mercenaries and pirates led him to distrust other people, but he came to believe that it was his calling to find others like him and teach them the power of the sea.

When he began to receive visions from the Elder Elemental Eye, he followed them to a hidden cavern beneath the Sumber Hills where he found a powerful magic trident called Drown imbued with the power of the primordial Olhydra, Princess of Evil Water. Taking up the trident, he devoted himself to Olhydra and expanded his followers into the Cult of the Crushing Wave.[1] 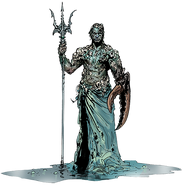 Gar with his trident.
Add a photo to this gallery

Adventures
Princes of the Apocalypse

Retrieved from "https://forgottenrealms.fandom.com/wiki/Gar_Shatterkeel?oldid=511987"
Community content is available under CC-BY-SA unless otherwise noted.