"The Tentacus" (a pinwheel of five black snaky arms, each ending in a Longsword)

Tentacus (a counterclockwise pinwheel of five black snaky arms, each ending in an identical sword)

Blood of the God
Sound of clashing weapons
Frenzies
Garagos (pronounced: /ˈgɑːrɑːgoʊs/ GAH-rah-gohs[9]) was a Faerûnian demigod of war and exarch of Tempus,[4] focused more on the aspect of destruction and plundering than the strategy or logistics. Seemingly existing only to destroy, the Reaver was a whirlwind of slaughter linked to the savage bloodlust that led to horrific carnage.[1][6]

Garagos preferred to appear as a scarred, rugged, 15 feet (4.6 meters) tall humanoid; he could grow arms out of his massive shoulders at will, never having fewer than five but unable to keep more than ten. He wielded a different weapon in each of his hands, from which stream out a cloud of bloody mist. This mist surrounded him, and within it could be heard a faint, continuous wailing, said by his priests to be "the lament of the lost as their essences flow out of them into the blood sea of battle. Garagos was usually half-naked and shunned the use of armor, though portrayed in religious art wearing a scarlet cloak said to be made from the blood of his enemies.[1]

Garagos was a bloodthirsty and single-minded god with a love for violence and admiration for those that gave into merciless battle frenzy, destroying everything standing in their way.[1] He himself was a practically elemental force of destruction,[6] his mindless rage uncontrolled by nature, and in contrast to his short temper, he would take a long time to cool down from an emotional boil.[1] In older times, Garagos was more composed and less likely to burst into violence, but his loss at the hands of Tempus saw his fuse shorten[1] and his new self was utterly devoid of the craftiness he once had.[6]

Just as Garagos had lost his wiliness, so too had he lost any sense of lenience of restraint when he was caught up in the heat of battle.[1] While still chaotic neutral, the debased and insane deity teetered on the brink of evil.[6] Some claimed that his heart had hardened because he had lost all hope for attaining his secret love, but this idea was dismissed by others who themselves speculated that this was just the logical conclusion of the course he was on, and that he was finally going over the edge to outright evil he had long been standing on the brink of.[1]

When Garagos manifested his avatar, legends said he wandered Godswalk Keep in the Barony of Great Oak in the Border Kingdoms, killing every creature he could find. There, he railed against the manifestations of Jergal and Sharess, whom he could not harm. His vehement frustration during these times, known to sages as the Meeting of the Three, spawned a different name for the event: the Howling.[10]

Tempus merely tolerated Garagos for reasons of his own, reasons that many Realms scholars believed stemmed from the fact that Tempus disliked mindless slaughter and destruction, and would be obliged to take on that portfolio if he slew his rival. Though both were chaotic neutral in moral alignment, Garagos was far more heedless than Tempus in what war wrought, reveling in destruction and slaughter while the greater deity valued honorable combat; this distinction between the different modes of war they represented may be the reason that Ao did not enforce his otherwise strict edict against portfolio sharing by stripping one or the other of his dominance over War.[citation needed]

Clerics of Garagos, known as Bloodreavers, spent their days fomenting strife throughout the continent, knowing that each conflict contributed to Garagos's continuing rebirth. They believed that Garagos eventually would regain his divine strength, unseating the hated Lord of Battles and reclaiming the mantle of Deity of War. They continually created and expanded networks of spies, faithful warriors, and other agents to increase the power of the cult, and the leadership of a cult cell was usually determined by the result of power plays between the agents of rival clerics.[citation needed]

During the age of Netheril, Garagos was part of the Netherese pantheon and was known as Targus.[3] Some time around or shortly after the fall of Netheril, the interloper deity Tempus managed to slay Garagos. Survived by die-hard followers in several regions surrounding the Sea of Fallen Stars and a church in Westgate, Garagos mysteriously and unexpectedly reappeared in Westgate's harbor during the Time of Troubles. Much quicker to anger and slower to show mercy than he was before his death, Garagos found most of his followers in brigands, bandits, and priests of the Deities of Fury who paid him lip service in battle.

In 1368 DR, Garagos appeared personally to slay a marilith named Glackzana who was building a temple to herself in his guise.[11] 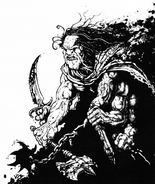 A priest of Garagos, among others.