Pirates[1]
Garden was the seventh planet orbiting the sun of Realmspace. Rarely seen from Toril, it appeared like a tiny green sparkle. It was one of the Five Wanderers, the five superior planets of the Torilian solar system.[2] According to the planetary scholars of Shou Lung, Garden was an example of a rare live world.[3]

Garden was actually a cluster of earth bodies linked together by a plant of incredible size called Yggdrasil's Child. All asteroids shared the same atmosphere.[1] At least some of these asteroids were large enough for towns[4] and even small rivers.[5] The distance between these asteroids varied, but most were sufficiently far apart to allow a careful spelljammer ship to pass between them.[1]

It was not known whether Yggdrasil's Child was sentient or not. The plant was extraordinarily resilient and long-lived and followed Garden's seasons in its own cycle of growth. Its main trunk was formed by hundreds of smaller trunks woven together, each over 100 feet (30 meters) in diameter. It was so massive that it took a person walking around the trunk about 6 hours to complete a lap.[1] Only the roots of the plant existed in the Prime Material plane. To observers, Garden appeared something like the roots of a young potato plant full of tubers, extracted from the soil.[6]

Because of the strange shape of Garden, sunset and sunrise happened abruptly; dusk and dawn were almost instantaneous.[7]

Garden was orbited by 12 small moons, each with unique characteristics.[1]

Grandchild
A perfectly spherical white moon with a high albedo.[1]
Yerthad
A highly dangerous spherical moon with an acidic atmosphere and covered with an ocean of acid.[1]
Peaceon
A flat-shaped moon, once used by elves as a stopping point, but later abandoned.[1]
Retinae
An eye-shaped moon with a large crater that resembled a pupil. Fungus that grew within this crater could be used as a material component or ingredient in spells and potions that improved vision.[1]
Glorianus
A crescent-shaped moon entirely covered in soft green grass and inhabited by a single druid called Griffon Broadleaf.[1]
Fjord
An airless, spherical mass of rock that had once been a mining colony.[1]
Locci
An airless rectangular moon, somewhat damaged by meteor impacts.[1]
Dragon Rock
A white dragon-shaped moon made of white jade with an atmosphere that smelled like pipe smoke. It had been created by an evil wizard in an attempt to learn Garden's secrets.[1]
Knurl
A spherical moon made of marble. Rivers of somewhat liquid marbled oozed on its surface. The fluid could be molded into sculptures and hardened within a few days of being removed from the moon.[1]
Sunson
A spherical blue fire body, twice as hot as the sun, which irradiated enough heat to warm up objects within a fair distance. Its light illuminated Garden during the night.[1]
Templar
A circular moon inhabited by 50 mages who studied Garden and sold magic items to finance their research.[1]
Farworld
A bristling trading post, despite its great distance from most inhabited planets.[1]

Garden was inhabited by a pirate cove led by Orion of Calimshan, who took the pseudonym Clive the Fearsome after his predecessor retired. The group consisted of 100 pirates commanding 12 small spelljamming ships.[1]

The Chainmen, a human group of slavers, supposedly had a base somewhere in Garden.[8] 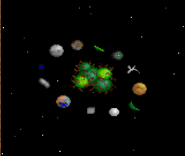 A depiction of Garden from the Spelljammer: Pirates of Realmspace computer game.