In their natural state, Ghaunadans looked like a green slime, but they were natural shapechangers capable of shifting between this ooze form and a humanoid form. They could shift in this manner once per day, and could spend up to 15 hours in the humanoid form at a time. Each humanoid form was unique to the individual ghaunadan: most took the form of a human male, although some took the form of a drow female. Regardless, the form was always a pleasant or attractive one. Ghaunadans preferred to wear the garish colors favored by clerics of Ghaunadaur: copper, amber, flame-orange, plum, purple, lilac, or lavender.[1][3] 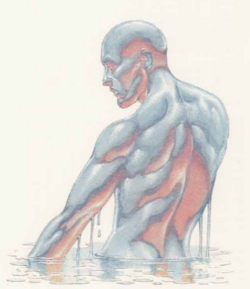 Ghaunadans were vile, intelligent, and charismatic individuals, and were devout servants of the evil god Ghaunadaur.[1][3]

Ghaunadans, in their ooze form, possessed blindsight and were malleable such that they could squeeze through very small spaces. They were naturally resistant to blunt force trauma in this form, and were immune to poison, sleep effects, paralysis, being stunned, and could not be polymorphed. Additionally, their natural pseudopods (which they could manifest in both forms) where covered with a paralytic slime.[1][3]

In their ooze form, ghaunadans typically attacked by forming two pseudopods out of their body to strike at foes and to coat them in paralytic slime. Additionally, they could mold themselves around an enemy's weapon in order to take said weapon. They could also make pseudopods in their humanoid form, but typically chose not to break their cover, instead using weapons and armor that they found or charmed off of someone. Creatures who locked eyes with a humanoid ghaunadan risked being induced to feel strangely attracted to it.[1][3]

Ghaunadans resided alone or in small groups, living in any subterranean area where they could find prey, but most often dwelling near where their god's enemies—such as worshipers of Eilistraee—were active. They were active across the Underdark, and preferred to live near other slimes and oozes, whom they would lead. Those of them who were active closer to the surface tended to learn Common.[1][3]

Several ghaunadans made their home in Undermountain beneath Waterdeep in the mid-to-late 14th century DR, and it was rumored that some of them may have been active in the city itself in their humanoid guises.[1]