Giant ravens were particularly clever creatures, far smarter than their smaller cousins.[1] Some were known to be capable of speaking as many as a hundred common words and communicate with meaningful phrases.[3]

However, these creatures were also well known to be combative[3] and trouble-makers. Domesticated ravens were prone to thievery and often played practical jokes on their handlers.[1] They also had a fondness for glittering and shiny objects.

While they only attacked other creatures while under duress, giant ravens pestered their foes with hit-and-run maneuvers made while in flight.[1]

Giant ravens lived alone or in mated pairs. Occasionally a few grouped together in small flocks that shared a nesting territory.[1]

Throughout their history, the Black Raven tribe of Uthgardt barbarians reared the birds whose name they adopted as their own. They cared for the ravens from the time they hatched until they could be ridden as aerial steeds.[1]

Black raven eggs and hatchlings fetched steep prices. As of the Year of Wild Magic, 1372 DR, eggs could be sold for as much as 1,500 gp while newborn chicks commanded upwards of 3,000 gp.[1]

Giant ravens generally traveled in flocks and were only rarely seen alone. Those traveling ahead in a flock would act as scouts, warning the rest of any creature that might threaten them. If such a creature were to be encountered by a scouting giant raven they would maintain a safe distance, but keep track of them and report on their movements to the rest of their flock.[3]

Much like their smaller cousins, giant ravens were an omnivorous species and would obtain a lot of their food through scavenging.[3]

Giant ravens were known to be found all throughout the North.[1]

Beyond the Prime Material plane, they could be found in the Domains of Dread[4] and across Yggdrasil.[5]

These creatures were considered very easy to train, at least if raised from a hatchling. Combined with their combative nature, this lead many people to utilize them as guards or messengers.[3] 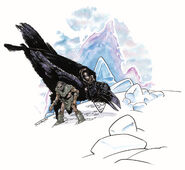 A giant raven in the Frostfell alongside an orc rider.
Add a photo to this gallery

Retrieved from "https://forgottenrealms.fandom.com/wiki/Giant_raven?oldid=627970"
Community content is available under CC-BY-SA unless otherwise noted.