Forests[3]
Giant spiders, also known as monstrous spiders, were quite simply enormous versions of regular spiders. Existing in various types, there was no way to singularly describe their appearance; with various types ranging in size from that of a dog to a house. Giant versions of tarantulas existed, as did black widows, spitters, spinners, and all manner of others. Their appearances, habits, and environments all varied greatly. Goblins were known to employ them as mounts.[6]

Due to the different types of such spiders, they varied largely in all ways, such as having different colors and behavior. Lolth, the Queen of Spiders, was bound to have giant spiders serving her.[6]

Giant spiders could attack in a variety of ways, typically whatever way their normal counterparts could. Some spun huge webs that prey easily stumbled into, while others spat a deadly poison. Some were capable of walking on ceilings, while others were not. Despite the differences between the types of giant spiders, all were formidable opponents and certainly not foes for any arachnophobes to face.[6]

Giant spiders' viscera was iridescent gold and purple in color. If it came in contact with a humanoid's skin, it had a burning and irritating effect, leaving skin enflamed with red splotches, however, it was mostly harmless.[7] 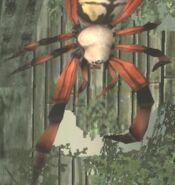 A giant spider residing in the jungles of Chult, from the game Forgotten Realms: Demon Stone.

A baby giant spider residing in the jungles of Chult, from Forgotten Realms: Demon Stone.

An illusory giant spider creeping up on Onyx the Invincible, from the Advanced Dungeons & Dragons comic.

One of the giant spiders encountered during the descent to Undermountain. 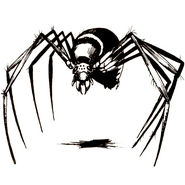 A giant spider from 2nd edition.

A giant spider with a horse caught in its web. 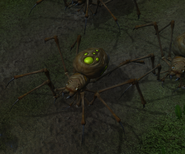