Ostrich-like
Giant striders were a species of ostrich-like, featherless and flightless birds adapted to the hottest of conditions.[2][3][4][5]

These creatures were covered in mottled, leathery dusky red skin. Their eyes glowed a dull red. Their beaklike jaws were lined with razor-sharp teeth and steam constantly billowed from both it and their noses. On average they stood around 8 feet (2.4 meters) tall.[2][3][4] While newborns stood roughly 6 inches (0.15 meters) tall.[3][4]

These creatures had an average, animal degree of intelligence and were rather fearless.[5] Their behavior was similar to that of other flightless birds.[3][4]

Giant striders were impervious to harm from elemental fire and had some magical resistance. Conversely, they were vulnerable to cold-based spells and abilities. Furthermore, exposure to flames or intense heat could heal these creatures, as though they were affected by the spell cure light wounds. And being assaulted with some intense fire, such as by the spell fireball, could heal them greatly.[2][3][4][5]

They had extremely sensitive olfactory glands,[6] which allowed them to track a quarry by scent identify places they had been for up to three days after they had left.[6][7]

These creatures were capable of attacking enemies from either side of them, using vicious bites and kicks.[2][3][4][5] Those domesticated by firenewts were especially trained to be highly skilled, close quarters combatants.[3][4][8][9]

In the late-14th century DR, the famed artisan Suratuk painted a number of giant striders vibrant shades of blue and red.[10]

Giant striders, much like other birds, were organized in flocks.[3][4]

In cold temperatures a giant strider would become sluggish, such as in areas underground or during night time in a desert. Their droppings looked like piles of oozy rock, lacked any odor, glowed with as much light as a torch, and retained heat for up to ten hours in confined areas.[11]

The mating season for them occurred in the spring, with males competing for mates by performing elaborate dances that were punctuated by explosions of fireballs. On average a giant strider hens laid one to four eggs, usually within a pit scratched into the ground. These chicks would hatch within five to six weeks and grew 6 inches (0.15 meters) with each, maturing within one year.[3][4]

These creatures were capable of directly metabolizing the heat of their surroundings, using it to fuel their own bodily functions. Without such extra heat, a giant strider would become cold and sluggish. Besides this, they subsisted upon few the animals and plants that they could find in their volcanic habitats.[3][4] They particularly found a herb known as sarsson to be irresistible.[12]

Giant striders were typically found within the same range as firenewts.[2] Such as the Peaks of Flame, the volcanic region around the Lake of Steam and its isle Arnrock, Mount Hotenow, and the mountains of Turmish.[13]

One of the few areas in the Realms where wild, un-domesticated giant striders could be found was in the Flame Fault on the island of Tuern.[2]

Giant striders were domesticated by and the favored mounts of firenewts.[2][1] Tribes of them were known to keep up to a hundred giant striders.[3][4] They were typically trained by the priests in firenewt society and made into very capable combatants in their own right.[8] Within their lairs firenewts provided for them food, shelter, and breeding grounds.[14] They also gave them the leftover offal of their victims.[11]

Their eggs were hatched within their masters' hatching grounds, though required considerably more heat for incubation than any firenewt egg.[7] These eggs would often be surrounded by the heated droppings of giant striders and at least six hens remained with them to provide security. They occasionally would shoot their small fireballs into the chamber to provide their eggs more heat, making the chamber a constant 170 degrees Fahrenheit (77 degrees Celsius).[15]

Upon hatching they would bond with a firenewt, becoming both their mount and friend until death. This master took full responsibility for their welfare in turn, raising and training them.[7]

Firenewts placed saddles atop the hips of giant striders controlled them by either kicking their sides or hitting them with spears. Bridles were not an option, since giant striders would bite through them with their sharp teeth.[3][4]

These creatures were often preyed upon by fire trolls.[16]

When a giant strider outlived its usefulness, which typically occurred after fifteen years of age, they were killed and eaten.[3][4][17] Their hides were used for leathermaking and their bones were made into tools,[7] for such things as saddles and signal horns respectively, while their tendons and ligaments were used to make saddle bindings.[17]

The eggs of these creatures could be used as an ingredient in brewing potions of fire resistance.[15]

How firenewts came to acquire their race's primary form of mounts, the giant striders, was a matter of some speculation.[12] Some among them believed they were a gift bestowed upon them by their deity Imix because they were able to breath fire.[1]

According to another legend the red dragon Imvaernarhro was in search of fire-based creatures to serve him when he came upon the firenewt colony of the Peaks of Flame. In return for a large band of them, he offered the firenewts an immense pile of gold with which could recast their statue of the deity Kossuth. But having looked upon knights and recognized how valuable mounts were to them in combat, the firenewts countered — in return for some beast they could ride and breed, they would give him fifty of their warriors. Imvaernarhro agreed to their terms and returned six months later with an immense bag, filled with giant strider eggs, and after quickly discovering their usefulness the firenewts honored their agreement.[12]

A large group of firenewts charge into battle with their giant strider mounts.

A lone, saddle-wearing giant strider in a volcanic region. 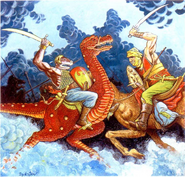 A giant strider mounted firenewt faces off against a camel mounted Zakharan warrior.

A giant strider being used as a mount by an elf in the Sword Coast, from Neverwinter

A giant strider, as depicted in the videogame Neverwinter.