Gillian's Hill was the smallest of the four hamlets that laid on the Trade Way that stretched to the south of Daggerford.[2] The town was named after Gillian Cantilar, the famed protector of the Trade Way.[1]

“
This looks to be just another typical Trade Way hamlet. And where is this famous hill that is spoken of? I don't see it. What? That small mound over there?
”
— Raegen Brunegar[3]

Small and humble town, Gillian's Hill was populated mostly by farmers. The hamlet was so unassuming, it did not even have an inn, and most travelers who stayed the night had to use campfires and tents.[2]

Lacking taverns, locals often gathered in each other orchards on warm nights when weather allowed. The farmers shared smokes and kegs of alcohol, exchanging tales and gossips.[1]

Gillian's Hill was located about a half-day's ride south of Daggerford on the Trade Way and about the same distance north of Liam's Hold.[1] The town was located on a mount of grass and dirt with a small tower[3] fire cairn on the hill's summit. It was used an a signal tower used to warn Daggerford of approaching armies from the Dragonspear Castle or Serpent Hills.[1]

Milestone markers, slabs of moss-covered granite with engraved distance to the next Trade Way stop, could be found on the southern and northern end of the hamlet.[3]

Gillian's Hill was a center for the many farmers from adjacent communities to get together, exchange news and gossips, and trade goods.[2] All local produce traveled through the hamlet, passing the hands of the distributor that supplied bigger cities, like Waterdeep and Daggerford with local goods. The usual trade included Churlgo Cheese, corn, grains, flour, fruits, vegetables, and cider. The farmers who lived in Gillian's Hill raised cows and had a access to fresh milk and beef.[3]

The enchantments placed on the tomb underneath the hill prevented anyone trying to dig through the hill to enter the dungeon. Such attempts caused the magics to explode in lightning bolts that continued to be generated until the dug hals were refilled with dirt. Several powerful spellcasters attempted to dispel magics of this protection but none has been successful.[1]

The main threat to Gillian's Hill, apart from Trade Way's bandits, were regular raids of lizardfolk of Lizard Marsh. They rarely posed danger and were more of a nuisance, as the reptilian humanoids mainly snatched anything not affixed to place and things that even remotely resembled weapons.[3]

Circa 1346 DR, a band of illithids from the Underdark used the ancient tomb under Gillian's Hill as their base whom where they raided passing merchant caravans and enthralled innocents into bringing more victims into the aberrations' tentacles. Eventually, a troupe of brave adventurers cleared the mind flayer infestation. Circa 1367 DR, a Harper note suggested that phaerimm moved into the same tomb, making it more perilous than ever.[1]

Sometime before 1372 DR, Yujist Glemp, the "almost famous" local sculptor gifted the good people of the town a stature that uncannily resembled Glemp himself. The sculpture was placed in the middle of Gillian's Hill. However, to no one's surprise, the statue was "refined" by someone's chisel one night. Yujist Glemp was outraged but failed to find the culprit. He set off to re-made the sculpture by placing his likeness on an obelisk, high up away from chisels of his haters. He never finished his work and mysteriously disappeared without a trace. The stature, now called Glemp in Granite, was moved to Torleth's Treasures, where no decent fold had to look at it.[3]

In 1372 DR, worrying rumors of a strange plague reached the ears of Liam Sunmist, a cleric of Lathander from Daggerford. The disease affected inhabitants Gillian's Hill and surrounding farms, burning through them at an alarming rate and took the life of Torleth Mindulspeer's beloved wife. The victims suffered from insomnia, fatigue, fever, and delusions, resulting in death. Liam theorized that this was an outbreak of vampirism, as the graves of those who passed from the plague were exhumed a few days after the funeral. With the Hero of Daggerford agreeing to investigate the disease, Sunmist recommended to seek out a mad aged healer named Mabda. The crone was convinced that a fabled creature Gothma was responsible for the disease and pointed to the crypts in the town's cemetery, where she claimed the giant vampire bat lived.[3]

The same year, a group of crossbow-wielding bandits took over the fire cairn tower on the hill's summit. They posed an ongoing threat to the Trade Way and Sejellus Krimp, the trade goods distributor posted a bounty on their heads in Daggerford.[3]

Gillian's Hill had its own old boogeyman legend. The creature known as Gothma was said to be a giant vampire bat who lived in the crypt underneath the town's graveyard. Legends attributed cow and sheep deaths and disappearances to the creature swooping from the night skies, draining he cattle. Another legend said that Gillian's Hill residents once tried to kill the creature but instead were transformed into vampire lords who served and defended Gothma.[3] 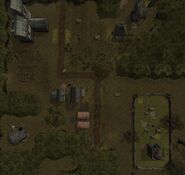 A birds-eye view of Gillian's Hill.