Glyth was the sixth planet from the Sun in the Realms' solar system and was a bastion of the Illithids.[1] Seen from Toril, it looked like a dull gray orb surrounded by a spectacular ring and orbited by 3 smaller bodies. It was one of the Five Wanderers, the five superior planets of the Torilian solar system, which (from the perspective of Toril) seemed to defy the normal paths of the stars.[2][3]

Glyth was a harsh planet, but only because of its inhabitants. What forests they did not have absolute control over they made sure were burned to the ground to prevent their humanoid cattle from hiding in them. This resulted in smoke filling the atmosphere which, in turn, nearly destroyed the atmospheric envelope and caused the planet to precipitate acidic rain constantly. The smoke caused the entire atmosphere to smell like a charnel house. Of course, this didn't bother the mind flayers, who almost universally lived underground.[1]

80% of the surface of Glyth was land while the other 20% was a strange gelatinous substance containing large amounts of water. The substance was edible and quenched thirst just like water would. It never turned brackish like normal water, nor did it ever freeze, remaining remarkably pure, despite the awful atmosphere. A sage who investigated the substance noticed that material that touched it was eventually sucked harmlessly right down to the bottom so that the substance remained on top. The poles of the planet were covered in regular ice, but, thanks to the smoke, it was dirty.[1]

Glyth's planetary ring orbited the planet at the equator. During the day it looked like a beautiful, perfectly formed cloud with sharp edges but at night parts of it were colored in various soft oranges, reds and blues. Sometimes, the ring cast a slight shadow on the planet's surface during the day. From the ground, Glyth's satellites were reported as being attractive-looking as well.[1]

Days were warm and lasted 30 hours and 30 minutes, but being on the surface ran the risk of getting hurt by the acidic rain that could burn the flesh of a lot of creatures.[1]

Haven was the smallest of Glyth's satellites, a hollowed-out asteroid that was used as a neutral meeting ground for rival illithid factions. Only illithid ships were permitted to enter the moon. A ship that did not belong to an illithid—and didn't have a very good reason to be there—was unlikely to ever leave again.[1]

Haven was also the base for Glyth's security forces that patrolled the region around the planet for intruders. The mind flayers met there to trade, solve disputes and plan their expansion.[1]

Mingabwe was a small moon where all spacefaring races were welcome. It was almost empty, but it was the best choice for humanoid ships to land at if they did not want to risk the attention of the mind flayers.[1]

Pockmarked by asteroid impacts and with frozen water, but no atmosphere, this tiny moon orbited Mingabwe. Hidden somewhere on this moon were two evil magic items that belonged to Justin Demonslayer before he became a paladin.[1]

Glyth had four rings made up of ice balls and small asteroids that orbited the planet's equator 7,000 miles (11,000 kilometers) above the surface. The rings were 100 miles (160 kilometers) thick at their widest and averaged out to 50 miles (80 kilometers) in most places.[1]

The innermost ring was mostly ice, made dirty by smoke escaping the planet's atmosphere. It was separated from the second by the gravitational forces of the moon Haven.[1]

The asteroids that made up the 700‑mile-wide (1,100‑kilometer) second ring had managed to arrange themselves according to color, having created a braided look to the ring.[1]

The third ring was 400 miles (640 kilometers) away from the second and was occupied by several large dark objects, none of which were smaller than 300 feet (91 meters) across. Rumors persisted that this was where Code Helm made their base.[1]

The fourth and outermost ring, at its most distant extent 27,000 miles (43,000 kilometers) from the planet's surface, was made up of tiny asteroids that got wedged together and formed lines that appeared as if they were wagon spokes. Each 'spoke' was separated from the next by thousands of miles.[1]

The rings' moonlets were inhabited by several colonies of oortlings. Once captured from comets, they had been selectively bred by the illithids into a docile behavior.[1]

Mind flayer refugees originally came from Glyth to Toril circa −11,000 DR in their nautiloids and founded the city of Oryndoll.[4][5]

However, sometime before 1367 DR,[note 2] a sage who was an expert on illithids drilled into the ice of one of the poles and noticed that the mind flayers living on Glyth at the time had only been there for around a century.[1]

During this period, the illithid population on Glyth was also constantly under attack by the Enforcers.[6]

By 1373 DR,[note 3] Glyth was an empty husk. One of the objects in the planet's rings, always thought to be an uninhabitable moonlet, turned out to be Atropus. Atropus was drawn to the planet when a war broke out between the illithids and a group of rebel cattle. When Atropus got close enough, he annihilated all life he could find before moving on, some said towards Toril.[7]

By the late 15th century DR, Glyth was once again inhabited by illithid colonies. Captain N'ghathrod once lived in one such colony, before turning to a life of piracy aboard the Scavenger.[8]

Glyth's dominant inhabitants were illithids, who exerted almost complete control over the surface and most of the planet's underground. On the surface, the mind flayers used the remaining forests as huge ranches in which they kept humanoids as cattle. They referred to the humanoids as "skull cattle" and to the ranches themselves as Skull Sod.[1]

The illithid selectively bred the humanoids in order to produce skull cattle of superior intelligence. The ranches, always kept on the move so the cattle lost its sense of direction, posed as advanced learning institutions in which the humanoids studied vigorously all their lives in preparation for the "outside world". In the late 14th century DR the most prominent illithid ranch owner and humanoid breeder was Surrell, who was credited with the finest-tasting oortlings and was famous even outside Realmspace.[1]

The remaining forests of Glyth were also inhabited by spider monkeys stolen from jungles of Toril. Their brains were considered delicacies and the monkeys attained a high price.[1]

In the late 14th century DR, a group of over 300 mercenaries from Code Helm resided near Glyth conducting raids against illithids in the system. They were led by the paladin Easel Gifford of Amn.[9][10]

Deep underground, below the caves inhabited by the mind flayers, a reclusive and mobile resistance organization consisting of an unknown number of humanoids called the Free Thinkers Union conducted raids against the illithids and attempted to liberate as many humanoid captives as possible.[1] 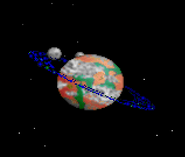 A depiction of Glyth from the Spelljammer: Pirates of Realmspace computer game.[note 1]
Add a photo to this gallery