The appearance of a go-zu oni was similar to that of the common oni except a go-zu oni was larger and stockier. Like minotaurs, they were large humanoids with the head of a bull. They commonly wore flowery ornamented robes and well-maintained armor.[2]

Go-zu oni were skilled warriors and trained to use a variety of weapons, such as halberds, naginata, swords, spears, and tridents. They also used their sharp horns to gore an opponent. They were incredibly strong, with the strength of a hill giant.[2]

Go-zu oni had the innate ability to duplicate the effects of cause fear, fire shuriken, fly, invisibility, and polymorph self spells at will, and cloud trapeze twice a day. They were able to detect invisible creatures or objects. Go-zu oni had a natural ability to slowly regenerate from wounds.[2] 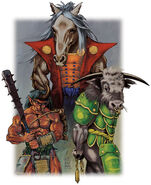