Golden[1][4][9]
Gold dragons were the strongest and most majestic of the metallic dragons, and were considered the apex of the draconic race.[1][10] Graceful and wise, they were relentless and dedicated foes of evil, injustice, and foul play.[4][9] While respected for their fairness and knowledge, they were also grim and reserved, and usually avoided casual contact with other dragons.[1]

A gold dragon's head was characterized by a short face with long and smooth metallic horns that swept back from its nose and brow, as well as the neck frills that adorned both sides of its neck. From the mouth and nostrils descended four pairs of long, flexible muscular spines that resembled whiskers or barbels. Along with the dragon's narrow eyes, these features contributed to give them a look of sagacity. As the dragon aged, its pupils faded away until the eyes acquired an appearance of shiny, liquid gold. Other facial features included a pointed tongue and small cheek horns that grew sideways.[1][9][10]

Gold dragons had broad sail-like wings[note 1] that started from their shoulders and extended all the way to the end of their extremely long tails. During flight, the wings moved in a graceful rippling motion that resembled swimming. This elegant flying motion was considered by many scholars, as well as by the gold dragons themselves, to be the most graceful among true dragons. When on the ground, the wings were kept closed upright over its back if the dragon was at rest, or folded facing back if the dragon was walking or running.[1][9]

A newly hatched gold dragon had dark yellow scales dotted with metallic specks that increased in size with age, until they totally covered the scales, giving a shiny and radiant golden color to the adult dragon's entire body.[1][9][10]

Despite being capable of eating almost anything, gold dragons tended to hunt large and dangerous monsters[10] and were particularly fond of including pearls and gems in their diet. Older dragons even had the ability to supernaturally locate gems in their vicinity. They tended to receive such gifts well, except if they were given as bribes.[1][4]

Gold dragons could breathe underwater.[1][4] They gave off scents of saffron and incense,[9] and sometimes a faint smell of molten metal.[10]

It was common for gold dragons to appoint themselves with quests to promote good. Those that earned a gold dragon's fury found a relentless enemy who would not rest until the utter and complete subjugation of the evildoers. Either by slaying or by bringing villains to justice, a gold dragon's only acceptable outcome was complete victory over evil.[9]

When looking for a lair, gold dragons usually sought secluded and remote locations. They had a preference for idyllic or picturesque locations, such as rivers or the bottom of lakes, cave complexes, ancient ruins, deep gorges, high plateaus, or mist-covered islands.[1][9] They also had a preference for rolling hills, open plains, and in some rare cases even within humanoid communities which they have chosen to protect.[10] They were very private creatures, mostly keeping to themselves and their families and rarely fraternizing with other dragons.[1]

Older gold dragons were capable of shapeshifting into humanoid or beast forms. They usually spent most of the time in this form, even within their lairs. When traveling, it was common for a gold dragon to assume a particularly non-threatening form in order to put adventurers at ease, as well as to observe local communities and to catch up on gossip and news of the outside world. In many cases, the dragon would use its disguise to provide help, company and comfort to those in need, or to set up traps for evildoers by using itself as bait.[1][9]

Strong believers in the greater good and in the rule of order, gold dragons were sometimes viewed as arrogant and dismissive. They tended to avoid philosophical or ethical discussions with beings they deemed inferior, although they enjoyed arguing in favor of law.[9] Due to their vast superiority with respect to the average humanoid, they often had difficulty in understanding the everyday troubles and needs of communities and in some rare instances might even end up becoming tyrants.[10]

Gold dragons preferred to parlay before a fight, using their intimidating presence and insight to determine if fighting was necessary, to find advantages, and to buy time to cast preparatory spells.[4][9] If fighting became necessary, they made heavy use of fire-based spells such as delayed blast fireball and fire shield, as well as deterrent spells such as cloudkill, globe of invulnerability, maze, sleep, slow, and stinking cloud.[4]

A common tactic for gold dragons in a fight was to use their breath weapons as means to scatter and weaken their foes.[3] They possessed two such breath weapons: a powerful fire breath and a cone of weakening gas.[1][4]

Every gold dragon in the world acknowledged a hierarchy which spanned the entire race. This structure had a single elected leader at the top: a wyrm or great wyrm called the King (or Queen) of Justice who bore the honorific "Your Resplendence" and served until death or resignation. The selection of a replacement (either by election or, more frequently, by acclamation) was a process in which all gold dragons took part. It was also possible for two dragons of equal merit to be elected as leaders, in which case they could share duties or alternate leadership.[9][11]

Because gold dragons were well aware of their responsibilities, the duties of the King of Justice were typically light. They would most frequently act as advisors to other dragons and their quests to defeat evil, pointing out consequences and hidden ramifications. Less frequently, the gold dragon ruler acted as a representative of the entire race when dealing with other species, or as a judge in the extremely rare occasion in which a gold dragon committed an offense.[9][11]

Gold dragons did not have strong preferences about their lairs, but they tended to choose lairs made of stone, such as caves and castles, and recruited other loyal creatures as guards.[3][4]

The lair of a gold dragon possessed some residual magic. While in its lair, a gold dragon had a limited capability to glimpse into the future and to banish invaders into a dream plane of the dragon's own creation. The region around the lair also experienced some magical effects, such as banks of opalescent mists that haunted evil creatures and warned good creatures of danger. The dragon also was capable of establishing a telepathic contact with sleeping creatures within 6 miles (9.7 kilometers) of its lair. Within 1 mile (1.6 kilometers) of the lair, gems and pearls shone and emitted a faint light.[1]

Gold dragons enjoyed treasure that showed artisanship, such as paintings, sculptures, calligraphy and porcelain.[9] They had a great fascination for magic items and loved to add them to their hoards.[11] It was common for them to magically ward their hoards so that it was impossible for an item to be removed without the dragon's knowledge.[1]

Gold dragons were known to reside in the Serpent Hills, the Earthfast Mountains, the Vast, the Graypeak Mountains, Loudwater, the Orsraun Mountains and Turmish.[12]

When choosing a mate, gold dragons could spend years debating philosophy and ethics and questing together as part of their courtship. Prospective mates then sought approval from the King of Justice. Some gold dragons mated for life through a rite known as the Oath of Concord, while others only mated for a short time. They could be monogamous or hold several mates at the same time.[9][11]

Gold dragons raised their young with exceptional care. A gold dragon wyrmling did not have whiskers, but they developed quickly. It was also common for gold dragon parents to send their young to the care of foster parents. This could serve a variety of reasons, such as freeing the parents for a quest, or just broadening their horizons.[9]

Wyrmling, very young, young, juvenile, and young adult gold dragons tended to be solitary or lived in a clutch of 2 to 5 dragons; adults, mature adults, older dragons, wyrms or great wyrms would live solitarily, in a pair, or a family consisting of a couple of adults and several offspring.[4]

Gold dragons were the only species of dragon to have their own written language. However, they could only write in human form, since their dragon claws were not practical for holding writing equipment.[13]

These dragons even kept records of historic events. The content of these records was mostly useless to human historians however, as they described dragon events like dragon births, trials and deaths, rather than events that affected the non-dragon world.[11]

During the glory days of Myth Drannor, before its destruction in the Weeping War, gold dragons were one of the races that dwelled in the City of Song in harmony. At one point before the city's fall, the gold dragons of Myth Drannor aided in magically trapping a powerful demon Rivener who became too powerful to defeat after he stole one of the Baneblades of Demron.[14]

Sometime before 1357 DR, Protanther was King of Justice for western Faerûn until he resigned in favor of Lareth,[11] who kept the title until his death in the Year of Rogue Dragons, 1373 DR.[15] He was succeeded by Tamarand, who still held the title as of 1479 DR.[16]

Sometime in the late 1480s DR Protanther represented the gold dragons by gathering a council of metallic dragons in the battle against the reformed Cult of the Dragon's efforts to summon Tiamat.[17] 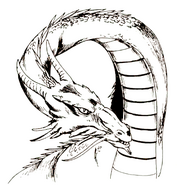 A gold dragon from 2nd edition. 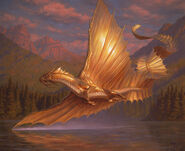