Golems (pronounced: /ˈgoʊlɛmz/ GO-lemz[2]) were several types of magically created constructs. They were mindless, emotionless creations that only know how to fulfill the orders of their creators.[1] The gods Azuth, Gond, Oghma, and Thoth favored golems and used them as servants. Clangeddin Silverbeard, Geb, Red Knight, and Segojan Earthcaller favored specifically stone golems, while iron golems were used by Flandal Steelskin and gem golems by Nephthys. Velsharoon favored flesh golems.[3]

They were tough, fearsome combatants with incredible defenses. Although they moved like living creatures, they were merely animated objects, giving them several advantages and disadvantages in battle. As constructs, golems were innately immune to a number of attacks; among these were mind-altering, poison, sleep, paralysis, stunning, disease and death effects as well as most spells.[1] They never tired, got confused or distracted and possessed both low-light and darkvision. Because they were mindless, golems lacked much in the way of creativity and initiative.[citation needed]

The creator of a golem was typically a wizard or a cleric, both of whom had control over the creature. They can issue simple commands as long as they are within 60' of the construct. The creation process involves a spirit from the Plane of Earth was bound against its will into that of the golem.[1] Thus the control of certain golems had a chance of being voided in proportion to the length of time that it was used in combat.[citation needed]

When a golem of a more expensive material was made - such as adamantine or mithral - it was originally made using a cheaper metal - usually iron - and then polymorphed, usually via a Wish spell.[citation needed] 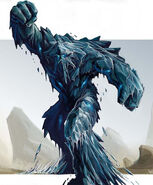 A sand golem.
Add a photo to this gallery