Wizard
Gorion was a learned sage and a respected member of the Harpers during the 14th century DR. In his senior years Gorion lived in the library-fortress of Candlekeep, at least between his adventures around Faerûn.[1][note 1]

Perhaps Gorion's greatest legacy was his raising of the Bhaalspawn children Abdel Adrian, who played a crucial part in the fulfillment of Alaundo's prophecy regarding the god-children. He acted as the foster and guardian to Abdel, preparing him for a life in which he would arise as a hero and even a great ruler of Baldur's Gate.[1]

“
"I felt obligated to raise you as my own. I have always thought of you as my child, and I hope you still think of me as your father"
”
— Gorion, in his note to Abdel

In his later years he had a notably older-appearing old face, highlighted by a friendly expression and pointed, gray beard. He often wore his long, gray hair tied up in a ponytail.[1]

Gorion carried with him a simple dagger and often wore dark gray robes.[1]

on was a skilled and powerful spellcaster capable of offensive arcane magic and spells that could heal and alleviate grievous wounds.[1]

Gorion's friends among the Harpers included many notable personalities, including the Sage of Shadowdale Elminster Aumar, and the Blackstaff, Khelben Arunsun. He was well-acquainted with the elven Harper Entillis Fulsom and was close with the husband-and-wife duo, Khalid and Jaheira. He trusted the couple like no others, and entrusted them with the care of his foster son Abdel in the case he could no longer watch over him.[1]

He was a lover to the woman Alianna, who was in fact a priestess of Bhaal.[2]

In his younger years, Gorion had been an active adventurer and agent of the Harpers. Among other exploits, he had once faced the red dragon Firkraag and emerged alive and somewhat victorious, at least enough to have scarred the beast while keeping himself in one piece.[3]

At some point around the Year of the Bright Blade, 1347 DR or 1348 DR, Gorion and his fellow Harpers learned about dark goings-on at a temple of Bhaal in the Forest of Wyrms. There they found many Bhaalspawn children who they believed were being prepared for a mass-sacrifice. Gorion encountered Alianna at the temple and froze just before he slew her – immediately before she was mortally shot by an arrow. The Harpers were able to rescue some of the babes, and Gorion took in the infant Abdel as his own.[2]

Gorion raised Abdel Adrian as his son at Candlekeep, offering him a sheltered life far removed from the danger his divine heritage would surely garner. He watched over the other Bhaalspawn child Imoen, though she was largely cared for by the friendly innkeep Winthrop. Gorion kept their divine heritage a secret from them, as well as others, sharing the sensitive information with no one else, save for his old friend and advisor on the issue Elminster. Gorion had kept the horrendous nature of his adoption a secret even after death, telling Abdel in a note that his mother died in childbirth.[1]

Sometime around the 19th of Kythorn, in the Year of the Banner, 1368 DR Gorion was warned of the threat of another Bhaalspawn, Sarevok Anchev of the Iron Throne, in a letter from his old friend Elminster. He sent out for Abdel so that they could flee the threat of Sarevok together. The night the pair fled from Candlekeep they were stopped by Sarevok and his henchmen. Gorion told Abdel to flee and fought off their attackers in order to buy him time to get to safety. While Gorion fought until the end, he was ultimately struck down by Sarevok in the dead of night.[1][note 2]

Gorion encounters Sarevok and his henchmen

Gorion in Candlekeep in 1368 DR

The shade of Gorion in the pocket plane

The Master Wraith taking the form of Gorion 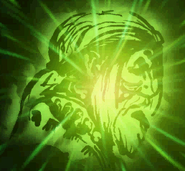 Retrieved from "https://forgottenrealms.fandom.com/wiki/Gorion?oldid=598286"
Community content is available under CC-BY-SA unless otherwise noted.