The Grey Forest, also spelled the Gray Forest and also called the Tsurlar Forest, was a forest located between the Vast and the nation of Impiltur, lying south of the Earthfast Mountains.[7][8][9]

Moon elves once lived in the Gray Forest several centuries before the 14th century DR. However, when hobgoblins and various other creatures began to encroach on their lands, the elves fought a losing war against them. They increasingly lost ground and some were driven out, but the rest were unwilling to give up their homes. The Gray Forest moon elves faced extinction. Thus, their last act was to transform themselves into grand gray-barked trees, so that they would never leave.[5][6]

However, a population of wood elves remained in the Grey Forest. In the Year of the Dawndance, 1095 DR, they joined an alliance with the cities of Impiltur and the dwarves of the Earthfast Mountains. Led by War-Captain Imphras Heltharn, this alliance fought to repel the hobgoblin hordes of the Giantspire Mountains.[1][2]

By 1372 DR, a new leader had risen to organize the hobgoblins of the Gray Forest. Some claimed he was a werewolf, others a vampire, and he was said to command dire wolves that aided his tribe in battle. [10]

A Cult of the Dragon base was operating in the Grey Forest. On Tarsakh 1, the Year of Rogue Dragons, 1373 DR, Maestro Taegan Nightwind, an avariel, informed Impiltur's Council of Lords and Regent-Queen Sambryl of the existence of this base and of a cell in the nearby city of Lyrabar. An Impilturan army marched into the Grey Forest after it, but on Tarsakh 12 it was routed when its own dragon allies were affected by the Rage of Dragons. However, the army rallied and with the aid of Vorasaegha, a spirit dragon, they attacked and destroyed the Cult lair on Tarsakh 16.[3]

In amongst the ordinary trees of the Gray Forest could be found circles of the grand, gray-barked trees with dark leaves that the moon elves had turned themselves into.[5][9]

Alithyn's Copse was a grove of weirwood trees of great age and grandeur.[11]

Small shrines dedicated to Eilistraee could be found in the Grey Forest.[4]

The Grey Forest once had two elven populations. The moon elves were either driven out or transformed themselves into trees centuries ago,[5][6] leaving the wood elves.[1][2]

Hobgoblins also dwelled in the Gray Forest. In addition to their forest homes, they also kept lairs in the Earthfast Mountains.[10]

A small Eldreth Veluuthra cell was active in the Gray Forest. They oscillated between assaulting the hobgoblins and alerting them to humans trespassing in hobgoblin territory.[6]

The Cult of the Dragon had a hideout in the Grey Forest, which was destroyed by the Impilturan army in Tarskah, 1373 DR.[3]

The sage Othla Multar theorized that drow occasionally emerged from a passage to the local Underdark in the neighboring Adhe Wood and crossed into the Tsurlar Forest. There they traded with pirate vessels that anchored in hidden coves.[12]

Around 1371 DR, rumors of werewolves in the Gray Forest drew monster slayers and trophy hunters to Impiltur in search of exotic wolf pelts. However, one band couldn't find anyone to guide them, and so they idled in Hlammach.[13]

By 1479 DR, elderly folk living outside the forest told a tale that there was once a great war between the elves (or "eladrin") and goblinoids of the Gray Forest, that wiped out both peoples. Only the circles of gray-barked trees remained to mark their presence.[9] In this time, the Gray Forest was said to be haunted, and few people risked journeying inside it too long or too deeply. Those who did told stories of ghosts, strange creatures, and peculiar hills that mysteriously appeared and vanished again.[9] 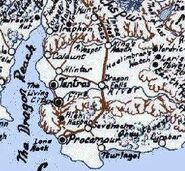 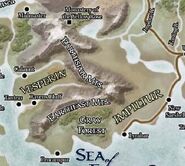 4th Edition map location
Add a photo to this gallery

Retrieved from "https://forgottenrealms.fandom.com/wiki/Gray_Forest?oldid=317549"
Community content is available under CC-BY-SA unless otherwise noted.