Bastard sword
Graz'zt, called The Dark Prince[7] and Prince of Pleasure,[3] was a demon prince and one of the most powerful fiends in the Abyss.[7]
“
I live for the moment when I can turn something pure into something perverse.
”
— Graz'zt[9]

Standing 9 feet (2.7 meters) tall, Graz'zt appeared as a lithe, muscular large humanoid. His skin shone like polished obsidian and his eyes glittered with malevolent green light. He had yellowed fangs, pointed ears, and six slender fingers decorating each hand. He was sometimes described as having six small black horns half-hidden amid his thick black hair. These fiendish traits were apparent, regardless of whatever form Graz'zt chose to take. He was considered the comeliest demon in the Abyss, and dressed in the most expensive and elegant finery on the entire plane.[7][1][10]

Wielding an acid-drenched greatsword in one hand and a profane tower shield in the other, the Dark Prince was a veritable killing machine when loosed upon the hordes of the Abyss. What's more, he had a vast repertoire of magical abilities at his disposal, making him a deadly magical opponent. Graz'zt's greatest weapons, however, were his mastery of seduction and guile. He entertained the notion that he was the most cunning and intelligent creature in the Abyss; indeed, there were few who could possibly contest such a claim.[10]

“
The dark man, the shadow king, the ebony skinned master of all things that revel in the night, oh master Graz'zt, spare me your wrath and grant me your favor!
”
— Besmal, human cultist of Graz'zt.[2]

Although he had not yet achieved divine status, Graz'zt was worshiped on the Material Plane by many monstrous races, most notably the lamias. Many of his high priests, known as the Chosen, were female, and the rituals they performed were violent and involved themes of darkness and betrayal.[7][1]

For a time, Graz'zt was trapped on the Material Plane world of Oerth by the witch-queen Iggwilv, who used his insight to elevate her own power. Eventually, however, she succumbed to the Dark Prince's charms. Graz'zt ultimately returned to the Abyss, but rumors abounded that he did, in fact, fall in love with his captor. A son, Iuz, was born of their union.[11]

Some sources claimed that Graz'zt was the creator of the Vasharans, a breed of vilely evil humans. Deemed cruel and soulless by the gods who created him, the Vasharans' ancestor was destroyed... but Graz'zt breathed new life into the corpse, long before he attained his present status. It was a terrifying legacy, for the Vasharans were obsessed with deicide, and destroying all gods became the reason for their existence.[13]

Graz'zt was always attended by six powerful lamias, and his marilith escorts, Unhath and Reluhantis, were never far from his side.[7] Bodaks and similar horrors were found in his Argent Palace.[11]

Technically, every demon living within Graz'zt's world-spanning empire was considered one of his loyal servants; those who proved otherwise were fed to the carnivorous plants in his perfumed hanging gardens. Noteworthy minions included a hulking goristro named Orwantz, who acted as Graz'zt's personal border control for Azzagrat, and Rule-of-Three, a cambion who met secretly with other fiends of the Lower Planes, to strategize an attack against the celestials.[11]

Graz'zt's most powerful servant was a mysterious, hyper-intelligent demon named Verin. Like Graz'zt, Verin appeared almost human, but his skin was deathly pale, and he constantly oozed spiritual slime. Verin could change his form at will, and often created a black-skinned mirror image of himself, known as Ztefano. He served as the Dark Prince's majordomo and chief ambassador to the other demon lords.[11][8]

The god Raxivort was once a servant of the Dark Prince.[11][8] He stole powerful artifacts from Graz'zt and escaped to the howling chasms of Pandemonium, where he became the divine patron of rodents and bats. Raxivort even has his own chosen race, a goblinoid horde known as the xvarts.[14]

Through his own schemings and mischief, Graz'zt became the chief enemy of Waukeen, a goddess of wealth and merchantry. During the Time of Troubles, the deity bargained for safe passage across Zelatar with information regarding a secret horde of treasure. Graz'zt readily accepted the offer, but betrayed Waukeen as soon as she arrived in the Abyss. Imprisoned in the Argent Palace, the goddess was forced to witness profane celebrations held in her honor.[15][8] A sinister group known as the League of the Six-Fingered Gentlemen (sometimes the League of Six Rings) wormed its way into the hierarchy of the church of Waukeen during the time that Graz'zt had imprisoned the goddess in the Abyss. Once there, they were not rooted out, and busily spread the Harlot's Coin Heresy among Waukeen's faithful. This heretical schism of Waukeen's faith taught that Waukeen had been gradually selling off pieces of her divinity and virtue to Graz'zt in order to finance her church and it was for failing to pay her debts that the demon lord imprisoned her. These heretics claimed that Waukeen became free because she finally paid her debt to the demon, resulting in Graz'zt owning the majority of Waukeen's godhood. The heretics thus believed that all who worshiped Waukeen were really worshiping Graz'zt instead, and they're just fine with that.[16]

Graz'zt warred with many other lords of the Abyss as well, including Baphomet and Yeenoghu. Thanks to the efforts of his son Athux, he overthrew the demon prince Adimarchus, who ruled Occipitus, the 507th layer of the Abyss.[17][18][19]

One of Graz'zt's most confusing enemies was the witch queen Iggwilv (a.k.a. Tasha). The two had been both lovers and bitter enemies over many years.[20]

Two of Graz'zt's other greatest enemies were Malcanthet, Queen of the Succubi, and Gwynharwyf, champion of the eladrin.[21] His conflict with the former ended up involving Kostchtchie, the Prince of Wrath, who swore revenge against Graz'zt for humiliating him, although Graz'zt himself did not consider the upstart demon lord as much of a threat.[22]

There were several competing, often contradictory theories as to Graz'zt's origin, some of which claimed that he was not a native to the Abyss, but was once an archdevil who served Asmodeus. In one of these theories, Graz'zt was chosen to lead an invasion of the Abyss as part of the Blood War—and conquered three layers of the Abyss—but became corrupted by the chaotic forces he had been sent to destroy and renounced his allegiance to the devils.[6] Another theory claimed that Graz'zt became disillusioned with his place in Baator when he realized that the hierarchy of Hell ultimately benefited only one creature—Asmodeus—and felt that pledging his allegiance to the Abyss was the only way to place himself beyond Asmodeus's clutches.[10]

Yet another theory suggested that Graz'zt was one of several demonic children of Pale Night, sired after the fall of the obyriths; this would make him the brother of several other demons, including Lupercio, Vucarik, Rhyxali, and Zivorgian. Those who subscribed to this theory believed that Pale Night must have drawn some great evil entity to herself to father her children; suggestions for what this entity could have been included an evil god such as Set, a baernoloth, the patriarch of a race of immortal warriors from another reality, an Outer God of Crawling Chaos, and even a sentient portion of the Abyss itself. Some maintained that Asmodeus was drawn from the Nine Hells to mate with Pale Night, implying that there may be truth in both theories.[23]

During the Rage of Demons in the Year of the Nether Mountain Scrolls, 1486 DR, Graz'zt was summoned to the Underdark below the Earthfast Mountains near the Master's Library where he subdued a force of Zhentarim.[24] 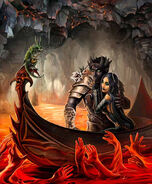