Forests
Green dragons were master manipulators who reveled in corrupting lesser creatures and hoarding them like possessions.[citation needed]

Green dragons were most notable for the large, waving crest or fin that started at the dragon's nose and ran the entire length of the dragon's body. They also had exceptionally long, slender forked tongues.[citation needed]

These dragons were known to have very bad tempers and a tendency for evil behavior.[6] They loved intrigue and secrets. They put up a front of diplomacy and deceit when dealing with stronger foes, but they revealed their cruel and petty nature when intimidating lesser beings or when gaining the upper hand. They delighted in stalking their enemies and listening in for any information they could gather before moving to attack. Green dragons especially enjoyed corrupting or consuming elves and fey creatures.[citation needed]

Beyond fighting with their massive jaws and claws, these dragons were capable of expelling a cone of poisonous chlorine gas.[6]

Green dragons sometimes served the dark Chultan demigod Eshowdow, and their appearance was considered a good omen by his followers.[7]

Green dragons valued their territory, but only as a means to gain as much power as possible without expending considerable effort. They would sometimes trade safe passage for a worthy item to add to their hoards. Even so, they were extremely cunning and duplicitous foes, and loved double-crossing others. A traveler who stumbled into a green dragon's territory might be able to bribe the dragon for safe passage, but more often than not the dragon would pretend to agree and then attack the unsuspecting offender once their guard was down. Worse, if the traveler impressed the green dragon during its stay, they might start thinking of the newcomer as a prized possession to be corrupted and sculpted to its will.[citation needed]

These dragons were typically found to live near woodlands.[6]

Green dragons were reasonably good parents, with both mother and father typically staying close to their eggs while they were incubating. Green dragon females either kept their eggs in a solution of acid or buried them in leaves moistened with rainwater. The green wyrmling was easily mistaken for a black, due to their nearly black scales. As the wyrmling matured, its scales became steadily lighter in color until they reached the striking green shade of an adult. The wyrmlings typically stayed with both parents until they reached adulthood (approximately 100 years).[citation needed]

One of the ways of creating a wand of stinking cloud was using a horn of an old green dragon.[8] 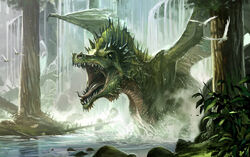 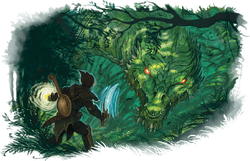 An unlucky adventurer comes face to face with a green dragon. 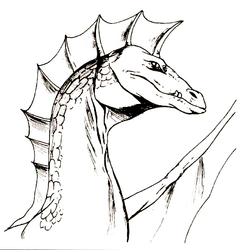 A green dragon from 2nd edition. 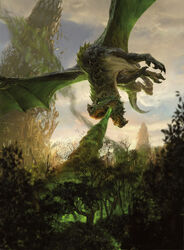 A green dragon causing immense destruction with its poison breath. 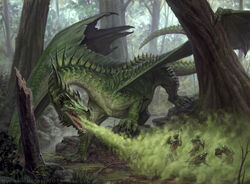 A group of soldiers experiencing an unenviable encounter with a green dragon.