He Who Never Sleeps
He Who Watches
The One-Eyed God

Gruumsh (pronounced: /gruːmʃ/ groomsh[12] or: /grʌmʃ/ grumsh[12]) was an orc god and a greater deity. He was envisioned with one eye by all who named him a god and was a deity mainly worshiped by orcs and orogs.[6]

Orc war priests wore a patch over one eye to symbolize their worship of the orc deity.[13] They also dressed in dark red vestments, armored with war helms and black plate mail. Gruumsh's sacred animal was the giant rat, his holy day was the new moon, and he was worshiped in orcish lairs where blood was sacrificed to him monthly.[citation needed]

Gruumsh was the unblinking god of destruction who unleashed the savage multitudes against outposts of civilization. He was worshiped by orcs and half-orcs and came to dominate some of the other savage humanoids as well. Gruumsh was a brutal god who loathed Corellon Larethian but denied that he lost an eye to the First of the Seldarine.[citation needed]

Gruumsh told his worshipers to do the following:

Though Gruumans maintained that their god was born with one eye, the eladrin asserted that he lost an eye in combat with Corellon. The two divine powers fought countless times, and they remained the bitterest of enemies.[citation needed]

Gruumsh was a god of conquest, driving his savage multitudes to expand their power by whatever brutal means they wished. His shamans advised chiefs and warmongers to raid, kill, and conquer.[citation needed]

Gruumsh once had an alliance with the conniving drow goddess Araushnee to bring down the gods of the elves once and for all. His plan failed, despite a divine force brought against the elven gods consisting of the Seldarine's enemies in all the goblinoid and elf-hating pantheons and Araushnee was transformed into Lolth. The two deities were great foes ever since, though Gruumsh's alliance with another assisting deity, Malar, was not so badly corrupted.[citation needed]

Gruumsh's enmity with the other gods started with a lottery. The gods of the dwarves, elves, gnomes, halflings, humans, and orcs met to draw lots to determine which parts of the world were to be inhabited by their respective worshipers. The non-orcish gods rigged the lot. Elves got the forests, dwarves the mountains, humans the right to live wherever they wanted, and so on, but there was no lot prepared for the orcs. Gruumsh was mocked and insulted by the others for this and was enraged over the others cheating the orcs into destitution as part of a joke. He lifted his spear to strike caves and holes into world and claimed these for his worshipers and vowed that they will grow stronger there to ultimately kill every one of the cheaters and take everything from them.[14][15]

In a past time, Gruumsh had two eyes but he lost one in a fight with the chief elven god Corellon Larethian. Gruumsh meant to paralyze Corellon with his magical spear; this attack failed and initiated an epic battle. During the course of this battle, Gruumsh injured Corellon and, according to legend, from the blood shed the elven people were created. Corellon ended the fight by putting out Gruumsh's left eye, which is how Gruumsh earned his moniker "One-Eye". Some orcish clerics denied this tale, dismissing it as elven propaganda while claiming that Gruumsh always had one eye.[16]

In the year −1071 DR, Gruumsh battled and killed Re, the leader of the Mulhorandi pantheon, during the height of the Orcgate Wars. This was the first recorded instance of deicide.[17]

Gruumsh's influence flourished in recent decades[as of when?] with the growth of the orc population, and as other humanoids came under his sway. His recent triumphs[as of when?] included putting the orc pantheon and other minor deities of the savage races under his thumb.[citation needed] 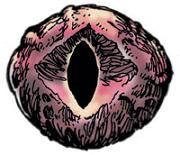 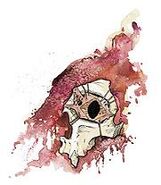 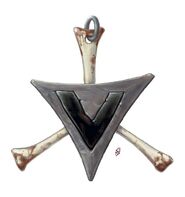