Forgotten Realms Wiki
Register
Don't have an account?
Sign In
Advertisement
in: Inhabitants, Articles in need of citations, Pages with stub sections,
and 2 more

Panther
Guenhwyvar was a 600 lb (270 kg) black panther who resided on the Astral Plane. She was summoned to the Prime Material Plane by the use of an onyx Figurine of Wondrous Power.[5][6]

Guenhwyvar was summoned through a detailed onyx figurine of a panther.[7] When summoned, the figurine emitted a gray mist which quickly solidified into the panther shape.[6] Guenhwyvar herself was described as a "huge black panther."[8]

This figurine was last in the possession of Drizzt Do'Urden, who treated Guenhwyvar as his ranger animal companion. She could be summoned to her master's side for twelve hours every other day. However, it was possible for her to be away from the astral plane for longer, but this caused her to become incredibly drowsy, barely able to lift her head.[5] Due to her nature as an astral being not of the Prime Material Plane, she was highly resistant to biological poisons and quite resistant to physical injuries as well.[citation needed]

Guenhwyvar's figurine was crafted by the finest dwarven craftsman in the Cormanthor region and enchanted by Anders Beltgarden, a 75-year-old human ranger/wizard who lived not far outside Myth Drannor in 253 DR.[9] It was to be a parting gift for Anders' friend, the Bladesinger Josidiah Starym, before Anders died of old age,[10] but Josidiah saw an intelligence in the giant panther's eyes that he felt should not be caged, let alone killed; he thought her body should not be enslaved to magic and a master's command.[11]

The elf's arguments eventually appealed to the ranger in Anders, and he could not go through with the slaying.[12] He let the cat go, only to follow her to a hill where Josidiah was under attack by a trio of giants and several dozen orcs. With the help of the panther and Anders, the monsters were defeated, but the cat was mortally wounded from the battle. The pair rushed her back to Anders' tower in a portable hole and decided to quickly carry out the enchanting ritual to save the panther's life.[13] Anders called the cat "Whiskers," but Josidiah objected to what he considered such a silly name for such a noble creature. Josidiah decided on the high elven word for shadow, "Guenhwyvar." This, he realized, was the panther's true name all along.[14] Anders intended for Guenhwyvar's spirit to become fused with the onyx statuette; the statuette was to transform into the panther when instructed by its owner, like any other such magical item. However, during the final stage of the ritual, the magic of the binding also absorbed that of the extra-dimensional hole Guen was partially lying in, causing a brief rift to the Astral Sea. Therefore, rather than being absorbed by the statuette, Guenhwyvar's spirit was merely bound to the statuette and came to inhabit the Astral Sea. When she was called forth to test the ritual's success, the panther was not a slave like a normal Figurine of Wondrous power would produce, but the same panther, with all of her intelligence intact. Also, the figurine summoned Guen rather than transforming into her as a normal figurine would, making the magic item truly unique.[15]

Josidiah used the figurine after it was gifted to him, but when he returned from his quest in the Underdark, he no longer carried Guenhwyvar's figurine with him.[citation needed]

At some point, the figurine fell into the hands of a denizen of the lower planes. The denizen gifted the figurine to the drow apprentice Masoj Hun'ett after Masoj aided him in some way. However, Masoj's master, Gelroos Hun'ett, took the figurine from him. However, when Masoj killed Gelroos in 1297 DR, he retrieved the statuette for himself.[7] Masoj summoned Guenhwyvar to protect him while spellcasting.[16]

Circa 1327 DR, Masoj, now a student of Sorcere, spent six months with Drizzt Do'Urden, instructing him in the magical arts. Drizzt became acquainted with Guenhwyvar when Masoj summoned her as a distraction from Alton DeVir's attack on Drizzt.[17] Drizzt and Guenhwyvar became great friends, sparring together and working together during patrols, despite Masoj's frustration. During one patrol, Drizzt and Guenhwyvar defeated an earth elemental.[18]

In 1328 DR, Masoj ordered Guenhwyvar after Drizzt to kill him. Because of her friendship with Drizzt, Guenhwyvar fought against the magical compulsion of the order. She was eventually able to overcome the compulsion and saved Drizzt's life. Drizzt returned to Masoj and told him his life would be spared if Masoj would give him Guenhwyvar's statuette. Masoj refused, and Guenhwyvar aided Drizzt in defeating both Masoj and Alton DeVir, who had teamed up together on behalf of House Hun'ett.[19] Drizzt subsequently fled Menzoberranzan with Guenhwyvar at his side.[20]

“
Forever would Guenhwyvar remember the renegade dark elf, whose heart was so strong and so good and whose loyalty was no less than the panther's own.
”
— R.A. Salvatore, Siege of Darkness[4]

In The Collected Stories: The Legend of Drizzt Anthology, R.A. Salvatore explained that while writing The Crystal Shard, he was told by TSR that magical items could not have a gender, despite his arguments otherwise. To his "horror," he later discovered after the book was published that some of the more awkward uses of "it" were changed — presumably by a copyeditor — to the male pronoun. Salvatore has subsequently responded to hundreds of letters from fans explaining this.[21] For example, on page 182 of The Crystal Shard (of The Icewind Dale Trilogy Collector's Edition) and page 155 of the first printing of The Crystal Shard trade paperback:

“
"Guenhwyvar is no demon," Drizzt reassured his large companion. "He is a friend and valuable ally." The cat growled, as if it understood, and Wulfgar took another step away.
”
— R.A. Salvatore, The Crystal Shard[22]

Despite these publishing errors, Salvatore explained that Guenhwyvar had always been a "she." Being a fan of Mary Stewart's Arthurian series, he decided to name her "Guenhwyvar" after Guenhwyfar, the Welsh version of the name for Jennifer or Guinevere.[21]

Guenhwyvar and her companion Drizzt Do'Urden. 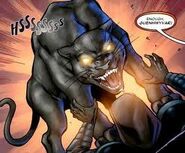 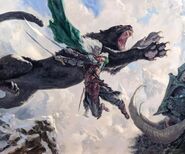 Fearless, even against the fiercest foes. 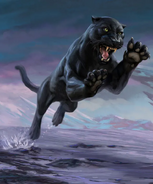 A depiction of Guenhwyvar from Adventures in the Forgotten Realms.