Beholders,[1] orogs[2]
H'Catha was the eighth and farthest planet from the Sun in Toril's solar system, also known as Realmspace.[3] Seen from Toril, it appeared as a crystalline glimmer of diamond white, although sometimes it was reported to appear as an emerald green star.[4] It was the last of the Five Wanderers, the five superior planets of the Torilian solar system.[5]

The planet consisted of a flat 300‑mile-thick (480‑kilometer) disc of clear water with a single mountain in the center. Close-up, this world looked like a giant wagon wheel, with the mountain, known as the Spindle, always pointing directly at the Sun. Over 1,000 miles (1,600 kilometers) tall and 200 miles (320 kilometers) wide at its base, the Spindle was the tallest mountain in all of Realmspace.[1]

Because of the planet's distance from the Sun and the fact that its rotation kept it always facing the sun, H'Catha's climate was cool, with the temperature always at 50 ℉ (10 ℃). However, it could support a variety of life, especially in its oceans.[1] In particular, H'Cathan doom radishes were considered a very savory dish.[6]

H'Catha had two moons that orbited the planet at its equator. The closest moon's tidal forces were responsible for keeping gentle maritime currents. The water constantly fell off the edges of the planet, evaporating into a thick fog which obscured the edges and then being reabsorbed into the planet's water cycle. H'Catha's ocean had a variety of life forms. However, because of the beholder inhabitants' reckless devastation and warfare, most of H'Catha's indigenous life forms were endangered.[1]

The closest moon of H'Catha was a spherical body with a highly flammable and volatile atmosphere, which ignited with the violence of one or more fireballs as soon as put in contact with oxygen. Therefore, this moon was kept in constant quarantine and no ships dared approach it.[1]

The farthest moon of H'Catha was metallic and roughly cylindrical. The moon's interior, which could be accessed by two doors at opposite ends of the cylinder, was an apparently abandoned wizard's laboratory with a supply of pleasantly scented oxygen that was constantly resupplied by magic jars. Mysterious voices could be heard inside, but ceased as soon as any of the doors opened. The moon in fact belonged to a mysterious and powerful wizard named Sarelk, who had spent over a millennium combating a terrible ship of his creation called the Batship.[1]

H'Catha was originally inhabited by a culture that had lost three ships trying to prove that their world was round. After the planet was taken over by beholders, the fate of this civilization was unknown.[1]

H'Catha was inhabited by different species of beholders, constantly fighting against each other for supremacy and control of the Spindle. This war consumed the entire attention of the beholders and progressively devastated the natural environment of the entire planet.[1]

Near the base of the mountain, six ports, each owned by a different beholder type, accepted spelljamming traffic from other beholders, as long as they did not come from any of the other warring factions of the planet, which would immediately provoke a war. The beholders were also friendly with the Arcane. Other species were only allowed to land if they had goods to trade and left as soon as they were done.[1]

In the early 1360s DR, a group of scro survivors of the Second Unhuman War were captured by the beholders of H'Catha, but their fate was unknown.[7] By the late 15th century DR, a community of orogs dwelt in a cavern system deep underground on the planet. Some of those orogs turned to piracy aboard the squid ship Scavenger.[2] 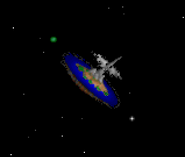 A depiction of H'Catha from the Spelljammer: Pirates of Realmspace computer game.