A halberd (pronounced: /ˈhɑːlbɛrd/ HAL-berd[4]) is a two-handed, martial melee weapon of the pole arm family.[2]

The business end of a halberd has three main parts: the axe head, the back spike and the spear tip. While many pole arms have similar structure, the halberd has a few distinguishing features. First and most important, the axe head is concave (curving inward) to nearly straight, instead of convex like most axes. The head is also set at an angle to the shaft instead of being mounted perpendicular. The back spike is fairly short and also angled slightly downward. The spear tip can be long and slender (typical for battle arms) or medium length and broader (often on ceremonial weapons). The whole weapon often reached 8 feet (2.4 meters) in length or longer with the spear tip.[5]

Known colloquially as a "Medieval Can-opener" due to its effectiveness against plate armor,[citation needed] the design of the weapon, with its ability to mount slashing, piercing, or tripping/dismounting attacks makes it extremely versatile against many different opponents. However, its large size is a detriment when fighting in close quarters.[6]

The halberd was a popular weapon in the Middle Ages but did not fare as well against cavalry as the pike. However, halberdiers could attack the flanks of a pike formation with great effect because the pikemen could not bring their much longer weapons to bear in close combat.[7] The average halberd cost 10gp and weighs 15 pounds (7kg).[1]

In 3rd edition Dungeons & Dragons, this weapon is considered a reach weapon[citation needed] and can deal slashing or piercing damage at the attacker's option. It is also capable of making dismounting and tripping attacks against suitable opponents.

Halberds will do double damage on a successful hit when set against a charging opponent. The back hook of the halberd can be used for trip attacks. If you are tripped during your own trip attempt, you may drop the weapon to avoid being tripped.[6]. The average halberd costs 10gp and weighs 12 pounds (5.5kg). It does piercing or slashing damage but is not considered a reach weapon.[2]

In 4th edition Dungeons and Dragons, the halberd is a two-handed melee weapon with reach, belonging to both the pole arm and axe weapon categories.[citation needed]

This weapon is by far most common in "civilized" areas of Toril with few, if any barbarian type characters choosing to wield it.[citation needed] Though cultures in Faerûn, Kara-Tur, and Zakhara may have similarly designed weapons, they are far less common, if not considered rarer, than in the interior areas of Faerûn.[citation needed] Many large city-states also field units of halberdiers for defense.[citation needed] 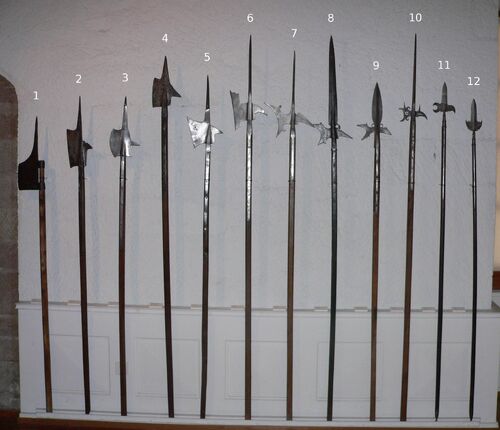 Using the classification system described in Pole arms, this image has several halberds along with other types of pole arms.

Retrieved from "https://forgottenrealms.fandom.com/wiki/Halberd?oldid=408310"
Community content is available under CC-BY-SA unless otherwise noted.