Varies by race and ethnicity of parents

Varies by race and ethnicity of parents

Same as elven parent[1]
Half-elves (also called Cha'Tel'Quessir in elven[10]) were humanoids born through the union of an elf and a human. Whether a half-elf was raised by their human parent or their elven parent, they often felt isolated and alone.[11] Because they took around twenty years to reach adulthood,[12] they matured quickly when raised by elves (who think they look like humans), making them feel like an outsider in either place.[12]

Most half-elves were descended from moon elves.[13] Pairings of elves and other races also existed, though they were rare.

Half-elves stood roughly around 5 feet and ​5 inches​ to ​6 feet and ​2 inches (1.7​ to ​1.9 meters),[14] making them only slightly shorter overall than humans, and weighed in at 130​ to ​190 pounds (59​ to ​86 kilograms),[14] making them heavier than elves but still considerably lighter than humans. Like humans, half-elves had a wide variety of complexions,[14] some of which were inherited from the elven half of their heritage, such as a tendency for metallic-hued skin and inhuman hair colors.[15] For example, half-moon elves typically exhibited a pale, bluish tint around the ears and chin, while half-sun elves had a color more reminiscent of bronze, with hair of gold.[16]

Unlike true Tel'Quessir, however, male half-elves were capable of growing facial hair and often did so to distinguish themselves, in part, from their elven parents. Half-elven ears were about the size of human ones, but like elves, they were pointed on the ends. Half-elves were also notably more durable and passionate than either elves or humans, a unique result of the two races' blending.[14]

Half-elves usually adopted the dress and hairstyles of the culture among which they were raised. However, it was also fairly common for half-elves raised among humans to wear elven clothing in order to proudly display signs of their dual heritage.[14] Regardless of what they wore, half-elves stood out in a crowd through the combination of physical distinctiveness and force of personality.[15]

Half-elves matured at a slower rate than humans, and could live for over 180 years.[12]

Half-elves gained an unusual blend of abilities from their two heritages. More durable and more innately charming than either humans or elves, half-elves lacked the grace or wisdom of their elven parents, though they did have some of the versatility of their human ancestors. Half-elves had a natural ability to learn outside of their specialty, giving them a strength in adaptability. Half-elves, like their elven parents, worked well with others and could lend some of their own skill to friends or allies.[14]

Like their elven parents, half-elves were typically immune to the effects of the enchantment school of magic. Likewise, half-elves also inherited the ability to see keenly in low-light conditions, with little or no ill effect, and had enhanced senses of sight and hearing compared to their human brethren.[17]

Half-elves, as a result of their unique heritage, exhibited a confidence and strength of personality uncommon amongst both humans and elves, a result of the blending between elven perceptiveness and human passion and drive. Half-elves were natural leaders and negotiators, and, perhaps because of their reality of living in two worlds, were unusually open-minded.[14] Some half-elves manifested this leadership through confidence and bravery, but others were cordial and polite, manifesting their force of personality in a subtler but no less effective manner.[18]

Like elves, half-elves were curious and inventive creatures, though this was coupled with the powerful ambition of their human parents. Half-elves also shared a love of the natural world and art with their fey parents.[17]

Half-elves, like their fey parents, were free-spirited and chaotic, with a distaste for overbearing rules and regulations. However, like humans, half-elves leaned neither towards good nor evil, and while they valued creativity and liberty like the Tel-quessir, half-elves lacked the virtuous bent that moderated these tendencies in elves. As a result, half-elves could prove unreliable and unpredictable allies at times.[17]

Half-elves generally liked to be around others, the more diverse the better. Perhaps due to the circumstances of their birth, or to a simple drive towards diversity, half-elves were often found in large population centers where other races mingled freely. Half-elves naturally gathered others around them, forming a large network of contacts that was both pleasing to their psyche and practical for other purposes. In spite of this love for forming connections, or perhaps because of it, half-elves rarely settled down for any length of time and possessed a genuine sense of wanderlust, moving from place to place in a way that made them very natural adventurers. However, whenever a half-elf returned to a place where they had already been, they hunted down old friends and renewed relations.[14]

Half-elves typically got along well with elves and humans who were understanding of their heritage. Half-elves also enjoyed the company of dwarves, gnomes, and halflings. Half-elves benefited in these relations from the fact they had the grace of an elf without the arrogance and the enthusiasm of a human without the latter race's common coarseness. Half-elves were less than entirely trusting, however, of half-orcs, with whom they shared a human heritage but whose orcish ancestry was historically opposed to the fey heritage of a half-elf.[17]

Half-elves often make excellent intermediaries between their two parent races, though often both sides suspected the half-elf of favoring one or the other. Where humans and elves were not on good terms, half-elves often found themselves caught in the middle.[17] In particular, humans could come to view both half-elves and their parents with a degree of envy and fear, mistreating half-elves in places where contact between the two races was rare, an attitude to which half-elves often reacted by leaving civilization to take on a solitary existence in the wild. By contrast, in places such as Silverymoon, where racial relations were more amiable, a half-elf was rarely seen as an enemy or outsider.[8]

Ultimately, half-elves endured, both physically and socially. Admired and respected by others of all races, half-elves naturally inspired loyalty and returned the fealty with deep friendship and a sense of responsibility. As such, half-elven leaders often led from the front of a battle, preferring not to send friends or followers into danger that they themselves would not face and putting themselves at risk while inspiring even more devout loyalty.[14]

Half-elves had no culture to call their own, although the culture of Aglarond may be said to be "half-elven" given the large influence of half-elves on the nation. Generally speaking, half-elves represented the culture into which they were born, though many half-elves wandered from their homes, becoming truly cosmopolitan individuals. As a result, many half-elves lacked a "true" accent or even a consistent cultural outlook, and a common name for pidgins in Faerûn is "the tongue of a half-elf."[15]

Many half-elves were inexplicably drawn to the life of an adventurer, possessed by a sense of wanderlust and alienation that drove them into unusual careers.[17]

Many half-elves worshiped the Seldarine in much the same way as did their elven parents, but others favored human deities such as Sune, whose gifts they might see as responsible for their birth. Khalreshaar, believed by half-elves to be the daughter of Silvanus and Hanali Celanil, and as such, the first truly half-elven deity, as seen a growing number of worshipers among half-elves.[19].Other human deities to whom half-elves often felt drawn included Chauntea, Selûne, or Valkur. Prior to the goddess' death, many half-elves dwelling in Aglarond also took up the worship of Eilistraee, in spite of her affiliation with the drow, a practice common in particular amongst half-elven bards.[citation needed]

Half-elves, being half-breeds, had no true homelands, though half-elves were common in some regions, such as in Aglarond, Gulthandor, the Dalelands, or Luruar. Before their mass migration northwards following the Spellplague, half-elves were also common in Cormyr and the High Forest.[15] In these regions there were highly concentrated populations of half-elves,[20] particularly so in Aglarond, which was the only country where half-elves had become the majority.[15]

As long as humans and elves had interacted, there had been cases of half-elves being born between the two races. In spite of this, the race typically remained rare enough that, except in rare circumstances, half-elves had not congregated together in large enough numbers to form true communities. Historically, half-elves had flourished when elven societies, such as the ancient empire of Cormanthyr, began to decline, as they lost their territorial integrity and came into contact with human settlers. In more benign cases, half-elves were common where humans and elves have learned to live in harmony rather than in opposition, such as the nations of Luruar or Aglarond.[16] 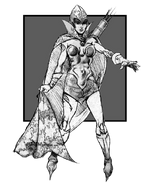 A half-elf adventurer from Elven Court.