J. R. R. Tolkien's hobbits
Halflings – also known as Hin[10] or the "quick folk" amongst themselves,[11] or the "sly folk" or "good folk" by other races[12][13] – were humanoid creatures similar in shape to humans – whom halflings called the "Big Folk,"[10] "Manyhanded", or "Hurbryn"[12] – but around half their size. Halflings got along well with most of the other races and were known for their curiosity and tendency to collect things.[1]

The term "halfling" was derived from the fact that a halfling was around half of the size of a human, but otherwise very similar in appearance.[14]

“
Who knows where a hero's spirit will grow? Even the smallest seed can produce the mightiest tree.
”
— Elminster[15]

Halflings were small in comparison with the members of most other races, standing somewhere from 2′8″‒3′4″ (81‒100 cm) tall and weighing on average between 30‒35 lb (14‒16 kg).[8] In many ways, halflings resembled small humans and usually had the same proportions as the typical human adult. Most halflings had dark hair and eyes,[2] regardless of their skin complexion which, although commonly ruddy in hue[16] had a similar range to humans.[2]

Nearly all male halflings were incapable of growing true beards, though many had long sideburns. Halfling hairstyles were often complex, with strands woven together or braided.[2] Although halflings had an affinity for collecting valuables, they did not prefer to wear these on their person, instead preferring more comfortable clothing.[16]

Halflings had lifespans comparable with, but slightly longer than, humans. A halfling was typically considered an adult in their early twenties and some lived into their 150s.[16]

Halflings were quick and dexterous humanoids, even given their size, with quick reflexes and an ability to recover easily from sudden danger. Halflings, who by and large had a strong force of personality, were also intensely courageous and were more likely to retain their valor than most other humanoids, even when under the effects of a spell or other power. Beyond this, halflings had what could be best described as a lucky streak, which made it less likely for them to be injured in perilous circumstances.[2]

Additionally, the small size of halflings had an effect on their abilities. Halflings were, for instance, incapable of wielding larger weapons like greatswords or halberds.[2]

It was sometimes said that halflings were weaker. As towards other humanoids, and as a trend, halflings tend to be weaker.[16] However, this was not a universal truth of the race.[2] Similarly, although many had an excellent sense of hearing, not all did.[16]

Halflings were by nature joyful and friendly in their dealings with others. Because they lived in a world where they were surrounded by larger creatures, halflings tended to avoid notice, often deliberately, or at the very least, acted cordial towards the larger races. Halflings appeared deceptively harmless, meaning they were often beyond the notice of enemies that might otherwise pose a threat to them.[2]

The halfling mind was practical and halflings concerned themselves with their immediate surroundings. They took pleasure in simple things, with few aspiring to greatness in the same manner as humans. Some halflings did become adventurers, but usually this was a practice taken up for reasons of necessity rather than personal drive. Because of their love for home and family, halflings made loyal and courageous allies, willing to put their own lives at risk for the sake of others.[2]

While many halflings did not have the ambition for adventure that some races did, most preferred trouble to boredom; the race was notoriously curious. Halflings were courageous, more so than many races, and their daring was often difficult to match. Many halflings also had a strong appetite for food and drink as well as narcotics and clothing. Similarly, many halflings were enthusiastic collectors, and loved to hold on to possessions won through skill and daring.[16]

Halfling communities were tightly knit groups found around the world, usually near the settlements of other races. Most halflings didn't recognize the claims of kings or nobles as sovereign rulers but instead looked primarily to their family elders to guide them. This focus on bloodlines enabled halfling traditions to continue for millennia relatively intact.[2] Halflings also valued a sense of community; halflings naming each other "halfling" was a salute of brotherhood.[17]

Halfling culture had a fondness for stories and legends and was rich in the oral tradition. So much care was put into the retelling of traditional stories and their preservation that halflings often unwittingly had access to lore about ancient and long-gone cultures or empires that others had long since forgotten about. Many halflings were able to recall some detail of the ancient past, though it was usually wrapped in the shrouds of legends.[2]

Halflings underwent something of a cultural and philosophical change through the Hundred Years of Chaos. During this time, the typical halfling aversion to adventure for its own sake was overcome by a powerful sense of wanderlust. Halfling-run adventure companies became common in many major cities of Faerûn.[18]

Halflings called the longer times of a day by how far the sun traveled in the sky and shorter moments like up to three minutes "A long tune" and around ten minutes "3 long songs".[19]

Halfling children were known to fish for bats using a light, durable twine string, and bait of live moths.[20]

It was said that "Cheese, bread, ale and more cheese are what fill a happy Hin's stomach." and that could be evidenced by their own agricultural choices in places like Secomber and Corm Orp. Sometimes the Hin made food goods for humans, among these were sausages, cheeses, stews, and baked goods. Halflings themselves liked those foods as well, but made them chewier and more rubbery for their tastes, with no strong spices, but instead using melding herbs. When Hin were left to their own devices, they produced flavored cheeses, sour grape wines, "blue eyes" (blue grapes), sour table grapes, and goat and sheep meats and their milk. In winter, the Hin had two stews ready all day; one lighter broth, and the other filled with more sustenance.[21]

Relations with Other Races[]

Halflings, in general, tried their best to get along with everybody, though exceptions did exist and ghostwise halflings were notoriously xenophobic. Lightfoot and strongheart halflings, however, were friendly and outgoing and were uncommonly adept at fitting into communities of humans, dwarves, elves, or gnomes. Most halflings, in fact, didn't live in communities of their own but instead regions dominated by other races. This was particularly true in human societies, which attracted halflings because of the comparative rapidity with which they changed.[2] It should be noted that halflings usually found insults directed at them to be amusing rather than insulting.[26]

There were several subraces of halflings, as follows:[note 1]

Anadian halflings
Dark-skinned halflings native to the planet Anadia. They were a people of extreme emotions and attitudes.[6]
Ghostwise halflings
The rarest of the halfling peoples, the ghostwise were reclusive and known for their strange talent for communicating without speech.
Lightfoot halflings
The most common variety of halfling, the lightfoots were typically nomadic, taking pleasure in travel and the experience of meeting new people.
Strongheart halflings
A martially inclined and well-organized people, compared in many ways to the industrious dwarves.

“
First there were dragons, then dwarves, then elves, then humans. Now it's our turn!
”
— Old halfling saying.[27]

Halfling history was, by and large, like the race, unremarkable. With the exception of the Strongheart nation of Luiren, halflings did not even have a unified culture to call their own. Records and evidence seemed to indicate that halflings, as a race, only appeared fairly recently, and after the appearance of the creator races, around the same time as dwarves, elves, and giants. The original homeland of halflings is uncertain, though it may have been within the area south of the Shaar and few were seen in the north until after the Hin Ghostwars, a tragic event that split the halflings into their current three breeds.[28]

The halfling race had many traditional homelands, though as a whole the race was typically nomadic.[29] Many halflings who did not wander lived primarily within human-dominated states.[10] By the 1370s DR, halflings made up about half or more of the population of the city of Secomber in the Western Heartlands and the town of Ethdale on the Easting Reach.[30]

The center of halfling culture was, until relatively recently, the kingdom of Luiren. The land was devastated by the Spellplague however,[31][32] as were other halfling homelands such as Arnrock and the Chondalwood.[33][34] Since then the halflings became more displaced than before,[35] though as a result they also came together in unity even more tightly than they were before.[13] There was also a sizable kingdom of hin called Delmyr, located in the forest on the eastern slopes of the Glittering Spires mountain range in the Hordelands. The folk of Delmyr were isolationists and lived much more in tune with nature.[36]

Since then, halflings were found in their greatest concentrations within the nation of Amn. Though formerly met with prejudice, halflings earned acceptance through their skill as merchants and business partners. Halflings could also be commonly found along the Sea of Fallen Stars, particularly human-dominated cities.[18] In fact, human cities were often the most common place to find halflings, who frequently found ways to exploit the ever-changing climate of human societies, although dwarven cities were also accommodating.[29]

The hin generally avoided realms where slavery was prevalent or those where exploitation of their kind was socially acceptable. As of the 1370s DR, this included the lands of Mulhorand, Tashalar, Thay, and Unther, as well as cities such as Glister, Mulmaster, and Zhentil Keep. The people of Halruaa and the Uthgardt barbarians were actively prejudicial toward halflings and did not allow them to infiltrate their lands.[30]

A halfling wizard from Icewind Dale.

Promotional wallpaper of a halfling rogue throwing a dagger.

A prosperous halfling innkeeper from Adventures in the Forgotten Realms, by Eric Deschamps 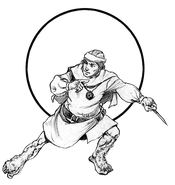 A halfling adventurer from Pool of Radiance: Ruins of Myth Drannor. 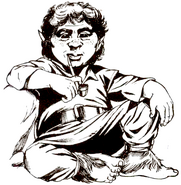 A halfling from 2nd edition.