Halfling fighters, rangers, rogues, druids
The halfling outrider was a champion of defense and scouting of halfling communities.

The outrider worked as an elite scout and rider for their community and they were naturally skilled in those areas. Seeing an outrider in the battlefield or at rest was a good sign that a halfling community was nearby but some also took to a life of adventuring and the road.

The halfling outriders were from skilled halfling stock and they came from many walks of life. Amongst them were fighters, rangers, rogues, and druids. All outriders had skills in mounted combat, mounted archery, riding, and scouting skills like listening and spotting.

Defensive riding
The outrider could assume a defensive riding style to outmaneuver enemy attacks. When riding defensively, they could not attack or perform any other actions.
Deflect attack
The rider could use a one-handed weapon or shield to deflect an attack against her mount.
Leap from the saddle
If the mount was not moving too fast, the rider could quickly dismount on the move. If the rider dismounted near an enemy, the rider might also charge the enemy in the same move.
Unbroken Charge
The rider skillfully charged over rough terrain as though it was normal ground.
Stand on mount
The outrider skillfully stood on their mount unhindered. While in this position, the rider could fire their missiles without any penalties due to riding.
Evasion
The outrider could evade area attacks, as could a mount they were riding.
Full mounted attack
The rider attacked an opponent with the full force of their mount while moving, but not when running or charging.
Quick Turn
A skilled rider could attempt to change direction in mid-run or charge, but if they failed their continued another 10 feet in the same direction.[1][2] 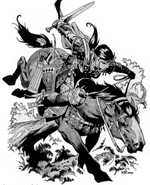