20 tons (18 metric tons)
Halruaan skyships were sailing vessels that flew through the air. They were the most famous wonder to come from the land of Halruaa.[3]

Like any ships that sailed on water, skyships required three masts, with square sails in order to navigate laterally with the wind currents. However they also had two or more steering panels that swung out on either side for guidance and a broad, beam for even landing on flat ground. At least ten magical plates, usually made of the shells of Halruaan sea turtles were added to the underside. More plates were needed for larger skyships.[3]

These plates were imbued with the magic that granted the ship flight and were connected to a control rod, made of silver and capped at the ends with gold. These magical components gave the helmsman control of the skyship's of vertical movement, allowing it to ascend and, with the help of the steering panels, guiding it's horizontal navigation.[2]

Skyships could sail on water as well as any sea-faring craft and could not be sunk, as long as their underlying magic was intact.[2]

Although a rare and genius invention, a Halruaan skyship was no more than an expensive magical item. If a spellcaster was proficient with the required magical knowledge and able to find the materials, creating one only took a matter of months. Crafting such an item required: 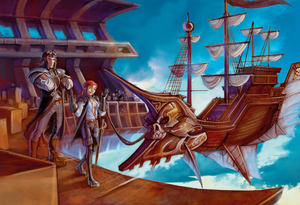 A skyship docked at Yaulazna. 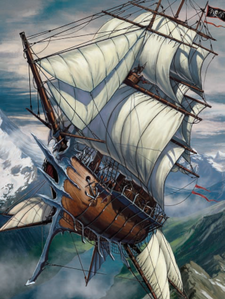 A skyship above the clouds. 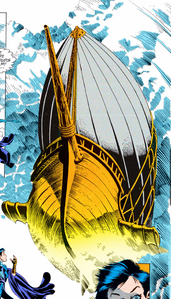