Harbromm was a forthright man[3] and steadfast ruler, who was wholly dedicated to the safety of his people.[1] He was an exceptional strategist and a master-level smith.[5]

He knew his destiny was tied to an extraordinary war that would later arise with the orc hordes of the North.[1]

The king sought to strengthen citizens of Citadel Adbar so that they were ready for any fight put forth before the kingdom.[1]

While Citadel Adbar was served by a number of fighting forces,[6] King Harbromm personally led the Knights of the Mithral Shield in battle.[4]

Harbromm had two sons, Bromm and Harnoth, twins born after the Thunder Blessing.[1] They both went on to serve as kings of Citadel Adbar, just like their father.[4]

During his time on the Council of 12 Peers, was often in agreement with his fellow councilor. Emerus Warcrown of Citadel Felbarr. They both felt their duty to dwarven-kind outweighed any loyalties to the Silver Marches.[7]

“
"Our leage should be–must be–engaged in building an empire so mighty that the orcs can be scoured from the mountains once and for all."
— King Harbromm[3]
”

When the League of Silver Marches was created, King Harbromm was hesitant to dedicate the people and strength of Citadel Adbar to its cause. After some deliberation, he offered the weapon-crafting skills of people for the alliance's war efforts and gained significant insight into the goings-on in the region surrounding the kingdom.[1]

During the War of the Silver Marches, Harbromm led the dwarven knights against the raging orc horde. He fell in battle and was survived by his two sons.[4] 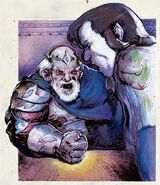 King Harbromm argues his stance in the council for the League of the Silver Marches.
Add a photo to this gallery

Retrieved from "https://forgottenrealms.fandom.com/wiki/Harbromm?oldid=577682"
Community content is available under CC-BY-SA unless otherwise noted.