The Hellriders (also written as HellRiders[1] and Hell Riders[2][3][4]), and also known as the Riders of Elturel or simply the Riders, were an elite cavalry unit who acted as the primary armed force of the city of Elturel in the Western Heartlands in the 14th and 15th centuries DR.[1][5][2][3][7][6][8] The Hellriders helped Elturel establish and maintain civilization in these harsh lands.[6] They were one of the most renowned and well-regarded military forces in the Realms.[7][4] For a city guard, they outmatched the armies of whole realms.[7]

A typical Hellrider patrol of the mid-1300s numbered thirty warriors, with at least one cleric of Helm and led by a Marshal.[1][5][2][7] They also had foot patrols of twenty warriors around the city.[5] Travelers most often encountered the Hellriders via these patrols.[2]

Skilled soldiers who fought from horseback, they were typically proficient with spears or lances, composite bows or horse bows, and long curved sabers. They could fire their bows from their backs of their horses while on the move without hindrance.[5][7] Their light warhorses were mighty destriers.[4][3] They were strong and well-equipped.[2][7]

In addition to guarding and policing the city itself, they patrolled the lands around that were within Elturel's jurisdiction with their well-known mounted patrols. In the 1300s, this included the farmed and settled parts of the Fields of the Dead up and down the Skuldask Road and Dusk Road, and the banks and nearby reaches of the River Chionthar using their four rowing barges. Any given point on the road would be passed by a Hellrider patrol every four hours, day and night, every day.[5][7] However, they could patrol and escort caravans as far as Iriaebor and Waterdeep.[1][2] In the mid-1300s, significant raids, sorties, expeditions, and punitive assaults on aggressive demihumans, as well as regular patrols, were commanded by Lord Dhelt, the High Rider of Elturel, or by High Watcher of Helm Berelduin Shondar.[2][5][7] They patrolled the same regions in the late 1400s.[9]

All around the Fields of the Dead, they established guardhouses and outposts, called Lodges, to supply the patrols, with fresh mounts kept ready[5][7] and stocks of food, water, weapons, and flammables on hand. Situated at strategic sites, these Lodges were protected by stockades and strong magical wards against arson and theft, which could be bypassed by certain ward tokens. Windstream Lodge stood on Skuldask Road, southeast of Elturel, and Stone Eagle Lodge stood beside the Chionthar, west of Elturel and downstream; these marked the borders of Elturel's reach circa 1366 DR.[7]

In the farmlands to the west, north, and east, they had warning beacons ready to light. Watchers on the roofwalks of Elturel's High Hall, home of the High Rider, were always on the lookout for returning Hellriders or the smoke or fire of the beacons.[5]

Foot patrols were regularly sent to The Bent Helm tavern to break up brawls around 1358 DR.[5]

Enlistment and training could begin as young as twelve. People came to Elturel from other lands just to join the Hellriders.[10]

All Hellriders were required to give a tenth of their earnings to Elturel's coffers.[1][2][3]

To be a Hellrider was a job for life, no matter how short it turned out to be. Those determined to resign were given a final mission involving very difficult tasks, and even if they succeeded, and survived, they were stripped of their gear, exiled from the city, and named a heretic in the eyes of Helm, God of Guardians, for abandoning their post. In the mid-1360s DR, there were no living ex-members of the Hellriders—too many had died in battle.[3] Lord Dhelt was a former leader of the Hellriders,[1][2] but still led patrols and significant actions.[5][2]

There were few paladins in the Hellriders.[11] However, in the late 1400s, members of the Hellriders could aspire to join the Order of the Companion, a paladin knighthood.[8] By 1494 DR, however, the Hellriders included knights and paladins.[12][note 2]

By the late 1400s, the Hellriders followed the Creed Resolute borrowed from the Companions. This had them swear to serve the High Observer and the greater good, uphold Elturgard's law, and permit no difference in faith to come between them, nor attribute the Companion to one god or another, among other codes of behavior. If a Hellrider overstepped the limits of law or proper behavior, their comrades would admonish them to "recall the Creed".[9]

On their commission, warriors of the Hellriders in the 1300s were granted a light warhorse and a suit of crimson and white plate mail armor, which was marked with an upturned crescent symbol.[1][2][3] In the 1400s, they wore the new crest of Elturgard: the sun and its smaller, blazing companion.[11]

It was said that every boy and girl of Elturel and the lands around dreamed of being a Hellrider some day, even those whose talents lay in the intellectual more than the martial arts. To call such a child a "hellion" was not an insult but a compliment, marking one as having the courage and drive to ride the Hellriders' destriers. Though they didn't all get special training, Elturians were practically raised in the saddle, learning how to ride and growing familiar with how horses behaved in any situation, even those that never became Hellriders.[4] In turn, all true warriors of Elturel were Hellriders.[3]

Songs told of the Hellriders' deeds and made them famous. They had a reputation for galloping out of the night to rescue farmers menaced by trolls or more horrible creatures.[5] One book about them was Last Charge of the Hellriders.[13]

In the 1400s, the Hellriders and the Companions were still held in highest regard. Both inspired the people to be devout in both their faith and the pursuit of justice.[8][9]

Thanks to the Hellriders' vigilance, caravans and convoys of riverboats chose routes through Elturel's zone of control so they could relax their own security, if only for a day or two.[6]

The warriors were close-knit and exceptionally loyal, both to each other and to their commanders.[1][2]

It was said that a company of Riders had once ridden into the Hells themselves—namely Avernus, the first layer—and from this story, the Hellriders were named.[1][2][8][14][15] The earliest known version told that it was to rescue one of their own, such was their great loyalty to each other.[2] A later version said that they rode through a gate to hunt down and slay devils that had been harassing the good people of Elturel.[8]

A third account expanded on this. In this story, fiends roamed the Fields of the Dead north and west of Elturel, stripping fields bare, slaying livestock, burning houses, and dragging folk away to an unknown yet horrible doom. As people lived in fear, Elturel's cavalry fought the fiends, riding wherever they must and enduring great casualties, but the fiends kept appearing in greater number. The High Rider of Elturel implored the people to pray to the gods for help. Surprisingly, help came—the rogue angel Zariel (desiring to destroy devils and demons and to have a mortal army to fight for her in the Blood War) came to Elturel the next day, declaring she'd found the gate in the Fields of the Dead west of Elturel through which the devils were pouring, and that she would lead the cavalry through to defeat them where they mustered. She rallied and trained an army of thousands, among them Yael, Haruman, Olanthius, and Jander Sunstar.[14][15] One early battle was to relieve Idyllglen from attack by Yeenoghu, gnolls, and demons.[16] When she thought them ready, in the Year of the Bow, 1354 DR, Zariel, riding her golden mastodon, led them out of the city, with the cheers and good wishes of the Elturians behind them, and embarked on the Ride, a glorious mounted charge through the gate into Avernus. Courageously, they battled the infernal legions of Bel, but the horrors of the Hells became too much for some. Jander and others turned and ran, sealing the portal and trapping the majority behind them. Though they were glorified as the Hellriders, they shamefully kept the secret of their escape and abandonment of the others, telling instead that Zariel and her army had been defeated and they were grief-stricken.[14][15] But they would be the lucky ones. Those still fighting through Hell grew twisted; Haruman crucified deserters on Coward's Way. The army was ultimately wiped out. Finally captured, Zariel swore fealty to Asmodeus, and vengeance on those who'd fled her.[14] The rest in Avernus were ultimately entombed in the Crypt of the Hellriders, their souls bound by oath to Zariel and haunting the place forever after as ghosts.[15][note 3][note 4]

In the mid-1360s DR,[note 5] the city was visited by a mysterious magical veil, stretching from the land to the sky, so Lord Dhelt sent a couple of Hellriders to investigate. Meeting the captain of the Hellriders, they peered through and saw a desert land, but as they ventured in, Elturel disappeared behind them and they were trapped in Har'Akir, in the Demiplane of Dread.[17]

In the Year of the Seductive Cambion, 1444 DR, shockingly, the High Rider himself was discovered to be a vampire, with a vast network of vampire spawn, charmed minions, undead allies, and sycophantic collaborators that surprised even the Hellriders. Now exposed, the undead infested Elturel, and whatever victories the Hellriders won during the days, they lost sorely in the nights. In time, the second sun called the Companion appeared, blasting the vampire lord and his spawn to ashes while the remaining undead cowered from its light. Elturel was swiftly liberated from their dead grip. This led to the reign of the High Observer and the establishment of the Order of the Companion, but the Hellriders remained as they had.[11][14]

In the Year of Three Ships Sailing, 1492 DR, the Companion changed into a black orb that tore the whole of Elturel and its populace from the Material Plane and spirited it away to Avernus. It transpired High Observer Thavius Kreeg had in fact betrayed the city and its people to the now-archdevil Zariel, with the Creed Resolute binding them to his infernal pact. Thus, she now had had her revenge, and her army.[18] In the days after, Elturian refugees and Hellriders (who'd been outside the city at the time) arrived at neighboring Baldur's Gate, some blaming Elturel's rival for the city's loss. However, the resident Flaming Fist began arresting Hellriders on sight, fearing they would cause trouble, but this only led to fighting. Those who did get in, like Hellrider Reya Mantlemorn, relayed news of the catastrophe and enlisted heroes who could investigate and ultimately pursue the stolen city into Avernus and thwart Zariel's foul scheme.[12][10] 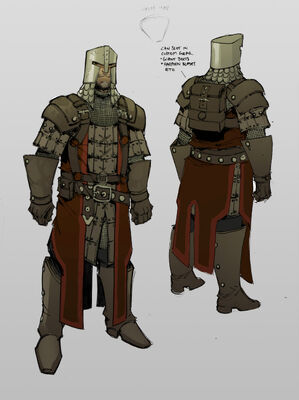 Concept art of a Hellriders soldier by Max Dunbar