Heucuva resembled skeletons in appearance. The main distinguishing feature was that heucuva often wore the tattered robes of their previous life as priests.[2][1]

Heucuva did not use weapons in combat, instead attacking with their powerful and sharp finger bones. They were strong enough to rip a chunk out of wood in one swipe. If struck, a target was infected with a terrible disease called huecuva blight. This disease was fatal unless a cure disease or a remove disease spell was used to heal the victim. Due to their intense hatred for good-aligned clerics, heucuva ignored all other targets until the cleric was slain.[2][1]

Heucuva were immune to all spells that influenced the mind and most effects that affected the living. They were also immune to poison. Up to three times daily, heucuva were capable of polymorphing themselves. They used this ability to avoid detection or to ambush a target. Infravision revealed a polymorphed heucuva's true form. Heucuva were skilled in the casting of divine spells, especially those of the Death and Evil domains.[2][1]

Heucuva were the damned spirits of clerics, druids, monks or paladins who forsook their vows or committed heresies. They were corrupted caricatures of their previous lives, spreading disease instead of healing and seeking to kill all those still living. Heucuva possessed only faint memories of their past lives.[2][1]

Heucuva were usually encountered in locations with little to no light, such as underground or within crypts. Heucuva preferred warmer climates; they were extremely rare in colder locations. As damned priests, heucuva decorated their lairs to resemble the abbeys and temples they once were a part of, using the corpses of their victims as parishioners. Some heucuva collected treasure from their victims, placing them on a mock alter as offerings. Occasionally, some heucuva did not seek out and settle in lairs, instead roaming the countryside in the dark on a mock pilgrimage.[1]

Like other undead, heucuva did not eat or drink. Heucuva did not retain the ability for speech, and instead were reduced to howling and lamented wailing.[1]

Heucuva bones could be ground into a powder and used as a component in the creation of magical items that were used to corrupt spirits or control undead creatures.[1] 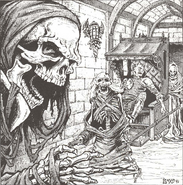 A procession of huecuva in Bard Keep, from the adventure module Ex Libris.
Add a photo to this gallery

Retrieved from "https://forgottenrealms.fandom.com/wiki/Heucuva?oldid=557059"
Community content is available under CC-BY-SA unless otherwise noted.