Thief
Hexxat was a vampire from Mezro who worked as an agent for a powerful and mysterious individual.[1]
“
"Ah, yes. Civilization. I can work with this."
”
— Hexxat

Carrying herself with a certain manner grace, Hexxat was cordial and respectful of others, even when they did not show her the same courtesy.[1]

More than anything else, Hexxat saw herself as someone who merely survived in the world regardless of the actions she took.[1]

Hexxat was born in Mezro during the 12th century DR, to a Mazewalker of Ubtao. She was however raised not by her mother, but several of her aunts.[1]

Along with another agent Phreya, Hexxat came to be employed by an individual known as L. He tasked her with recovering three artifacts from across the Realms: The Casque of Imprisonment located in a tomb within the city of Athkatla in Faerûn; the Claw of the Black Leopard found in the crypt of Durkon in Kara-Tur; and the Shroud of the Unproved within its resting place in Zakhara.[1]

Hexxat traveled to Athkatla first and slipped into the catacombs beneath the city's Grave District. She found the resting place of the reviled vampire warlord, Dragomir the Red. When Hexxat removed the casque from Dragomir's head the ancient vampire rose up, free from the magical binds that immobilized his body. Dragomir rose up turned Hexxat into a vampire.[note 1] He imprisoned her within a nearby stone coffin, where she would languish for over two hundred years.[1]

As of the Year of the Gauntlet, 1369 DR, Hexxat was mentally dominating young women in the city in effort to attract a group that may free her from within the tomb. She began referring to herself as 'The Sleeper' through the voices of the women she enthralled.[1]

Later that year she appeared in the village of Amkethran in Calimshan, ready to perform the final task for her patron L. In exchange for her humanity, Hexxat would hunt down the lich Korkorran, who once served her master.[1]

In the Baldur's Gate series of video games, Hexxat is voiced by Sereana Malani. 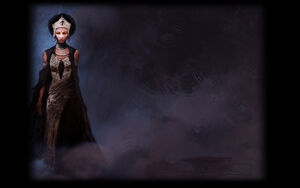