Hezrous (pronounced: /ˈhɛzroʊ/ HEZ-ro[7] or: /ˈhɛtzroʊ/ HETZ-ro[4]), were type II[5] tanar'ri demons[3] that were known for their simplicity in control and desires. They often supervised lesser demonic entities while working as the toadies of more sinister threats.[4]

Hezrous were large demonic monstrosities that stood 8 feet (2.4 meters) tall and weighed 750 pounds (340 kilograms). They bore a superficial resemblance to a toad in humanoid form, with arms and hands instead of forelegs. Within their wide maws were rows of blunt teeth that had a powerful crushing force and a series of long spikes ran down their backs.[3][8] Hezrous could walk on either two feet or on hands and feet, but always fought standing upright.[3][4]

Hezrous were obedient and simple yet dangerously powerful beings, and as such were among the dominant monsters within the Abyss. A hezrou's main motivating factor was food, followed by a desire for wanton destruction. They gladly served under more powerful demons or even summoners who supported their behavior.[2] Their love of combat surpassed that of vrocks and the two possessed similar eating habits.[5][3] Despite their love for fighting, hezrous were not opposed to diplomacy, even with mortals, and might engage in trade when carrying cargo such as slaves.[9] Hezrous were not particularly intelligent, intuitive, or otherwise mentally capable, a fact that was seen as a virtue by their masters as scheming was not their job. Unfortunately for those under their thumb, hezrous were still demons through and through, beating up on even loyal subordinates for fun and just being generally foul-tempered.[4]

Hezrous were cunning on the battlefield and could fulfill roles as both powerful warriors and capable sergeants. They were somewhat ineffective against non-demonic beings as many of their abilities didn't work against evil outsiders. When against non-evil entities, they opened combat by casting blasphemy, then favored chaos hammer or unholy blight from time to time as suited their foes.[3]

Their amphibian skin exuded a toxic substance that produced a cloud of noxious gas when they were agitated while their own olfactory senses were quite sharp.[4]

Normal demonic resistances, immunity to non-magical weapons, telepathy, and summoning, particularly of dretch mobs and other hezrou, were also among their powers.[1][4]

They gladly forced their way into and behind enemy ranks, where their foul stench could overwhelm as many and as early as possible and they were free to rip into their opponents with tooth and claw.[3]

Hezrous were integral to both the Blood War and the day-to-day proceedings of the Abyss in general. At their core, hezrous functioned as enforcers, either as sturdy foot soldiers or solid sergeants.[10] Their ability to focus on simple tasks, oversee armies, lack of plotting skill, and great numbers made them ideal for their duties. They normally patrolled the abyssal layers, enacted the will of their respective demon lords and nalfeshnees, and tyrannically controlled lesser demons like dretches[4] and chasmes.[11] Hezrous often sought to make themselves useful to their masters so as to ensure they were not sent into unwinnable front-line situations, as they were seen as somewhat expendable.[2][4][1]

Despite not being particularly good at scheming, hezrous still made use of temptation, making simple but cruel deals to those in states of despair. Every now and then in a century, hezrous went on what were called Dark Walks, plane-shifting to the mortal realm to make pacts with desperate souls. They would willingly enter their service and complete a major task like the destruction of a hated location or retrieval of a powerful artifact at the cost of trapping the mortal or a loved one in the Abyss and having them serve as a mane for eternity.[4] Otherwise, when on the Material Plane they recruited dull-witted followers in trolls, hill giants, ogres, and other creatures known for their power.[10]

It was possible for a marilith to be demoted to a hezrou as a punishment, bringing a change in sex from female to male.[12]

The Faceless Lord Juiblex was served primarily by hezrous who paid him significant fealty in victims. In fact, his primary servant, Darkness Given Hunger, was actually a hezrou demon whose possession of the largest known black pudding had been made permanent through magic, fusing the two together.[13][14]

Demogorgon also employed many hezrous as lieutenants, although his were twice the size of any others within the Abyss.[11]

Hezrous had a kind of half-organic armor plating under their flesh, an ancient alteration made by the sibriexes.[15]

The hezrou Zaxis was actually a fallen marilith named Bethsiva, whose child was the balor Baalbisan with a rank even higher than hers.[12] 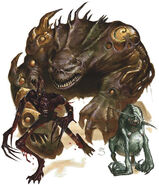 A Hezrou attempting to escape its bonds.
Add a photo to this gallery