Balduran (non-religious veneration)
The High Hall, also know as the Ducal Palace,[1][2] was the grand keep of Baldur's Gate, located in the center of the Temples District in the Upper City.[3] While it historically served as a military fortress, by the 15th century DR it was home to nearly all of the city's governmental business.[4]

Despite its primary role as a civic building, High Hall catered to all Baldurians. It served as a meeting place for the city's wealthy nobles, a festhall for large feasts and gatherings, as well as a sort of "secular temple" dedicated to the great explorer Balduran, after which the city was named.[4]

The keep of High Hall was dotted with elegantly-designed windows, adorned with grand spires and gargoyles that took the place of siege weapons that sat upon the parapets in years past. The roof of the keep had been retrofitted to collect rainwater, which flowed through aqueducts designed by priests of Gond to contribute to the city's renewable freshwater fountains.[4]

The outer wall of the keep surrounded a central courtyard, which held a small public garden lined with benches and intersected by numerous walkways. While everyone was welcome within this terrace, most everyone were always too busy to enjoy its lush scenery.[4]

The grand chamber of Hall, used the Parliament of Peers when they were in session, composed the first floor of the hall.[5] The chamber sat 300 individuals and was almost entirely full when the body was in session.[4]

Also within the Hall were a dozen or so small meeting rooms, often used by the Parliament, along with the offices of the Council of Four and their respective court rooms.[4]

The eastern wing of the ground floor of High Hall celebrated the city's history and paid tribute to both its former Grand Dukes and storied heroes. As a mausoleum, it served as the final resting place for these great men and woman. Their tombs and caskets were interred within this chamber, or beneath its stone floor above the keep's vaulted dungeons. As a museum, this chamber featured a grand statue of Balduran, along with several glass cases that housed many of his "holy relics". Among these were item's he once kept in his possession: his sword and shield, a helm and even the butter knife he used at meals.[4]

The original dungeons that served High Hall as a military fortification saw little use centuries later. They were expansive and unpleasant, damp halls under a vaulted ceiling that supported by a series of dense columns. Several dozen chambers, lined with the original brick, were inter-connected by a labyrinthine system of passageways cut into the rock. While a few chambers had been converted into jailer's cells, the rest of the dungeons were infested with rats or in near-complete disrepair.[5]

Although it was a fortress, the High Hall was used as a venue for the city's courts, official record-keepers, and other governmental servants. Along with the guilds of Baldur's Gate, both the Parliament of Peers and the Council of Four held their meetings within its halls.[3]

While the Hall was primarily a hub of city business, it also served as a grand festhall for both public feasts and private banquet parties. When not booked for official use, the private meeting chambers were available to those who requested them first.[4]

Within the courts, the dukes of the city presided over certain criminal hearings. The only cases that required the presence of a judge were those in which an individual's guilt was held in doubt, or when the law of the city was not entirely clear. Criminals caught in the act, or those who nearly got away with it, were sentenced and imprisoned by the officers of the Flaming Fist.[4]

As the Four Dukes were quite busy with duties of governance, this responsibility was often delegated to one of the several proxy judges. This was considered a cushy, highly-desired assignment as these judges were regularly offered gifts and bribes for a possible absolvement or exoneration.[4]

During the early years of Baldur's Gate, the High Hall served as a haven of safety for the city's citizens.[6] It has was not used as an actual fort for many years, having been renovated for courtesy and comfort throughout the years.[4]

Although several dwarven engineers assured the city officials there was little chance of collapse, some of the graves found in the mausoleum had collapsed through the ceiling of the dungeon below, sometime before the 1480s DR.[4] 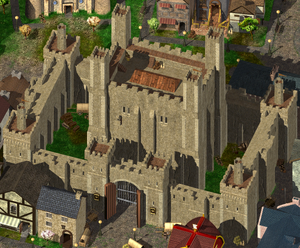 Retrieved from "https://forgottenrealms.fandom.com/wiki/High_Hall?oldid=664954"
Community content is available under CC-BY-SA unless otherwise noted.