Hill giants, called haugjotunen in their own language,[10] were a voracious and dimwitted race of giants that tended to live in hilly areas.[11]

Hill giants were short and stocky in comparison to other giants. They were extremely muscular, capable of hurling boulders up to 300 lb (140,000 g) through the air.[citation needed] Their bodies had a tan to reddish-brown skin tone, hair of a brown or black shade, and eyes with red rims.[6]

The reason hill giants appeared to be more muscular than other giants was because of their shorter limbs, but taller giants, such as fomorians, were still much more powerful.[citation needed]

A hill giant's metabolism was very high for a giant, and as a result, it had to eat a great quantity of food. It was not averse to eating demihumans, and would eat almost anything.[12]

Though hill giants would fight with anything at their disposal, they favored form of weaponry was clubs.[6]

Coombe giants
Coombe giants were hill giants who adapted to life within the treacherous Katakoro Shan mountains in the Hordelands. Though slightly smaller than their lowland cousins, coombe giants possessed amazing balance and dexterity, allowing them to safely traverse the steep slopes of Katakoro Shan and even wield a weapon in each hand proficiently.[14]
Giant trolls
The result of hill giant/troll crossbreeding.[15]

Hill giants lived in large communal families known as huslyder.[16] In their society, the most evil act that could be committed was the betrayal of one's tribe.[17]

The ordning (social ranking) of hill giants was determined by a combination of an individual's physical strength and eating ability.[18]

Hill giants that became sick were isolated from their clans. Due to their voracious appetites, such sicknesses were often related with consumption of spoiled and diseased food in spite of the hill giants' extraordinary constitution. A giant that was incapable of keeping food down was constantly visited by a priest or chieftain who sought to interpret signs of Grolantor. Individuals who did not recover and remained sick were then imprisoned and set to starve to the point of madness. These prisoners, called mouths of Grolantor, were seen as physical manifestations of the deity's endless hunger and caused extreme destruction if set loose.[19]

These giants tended to dwell in hilly areas[11] and caves, often in such places that were considered forsaken by other creatures.[6]

Hill giants were known to speak the general giant language Jotun, but they also possessed their own dialect of the language known as Jotunhaug.[11] However, they were often largely illiterate due to education being undervalued in their culture.[20]

Common given names among hill giants included the following:[21]

Among giant-kin they were most often seen working alongside verbeeg and ogres, the latter of which they often traded with for trinkets or food.[22] Ogres were also known to act as guardians in hill giant lairs.[6]

Besides working among their kin, hill giants were known to work in more civilized areas, such as for the Rakshasa nobles of Tirumala[23] and in the army of Thay.[24]

Adventures
Desert of Desolation • Dungeon #15: "The Dragon's Gift" • Waterdeep • Storm Riders • Dungeon #27: "Bride For A Fox" • Dungeon #28: "The Pipes of Doom" • Dungeon #29: "Nymph's Reward" • Dungeon #34: "On Wings of Darkness" • A Dozen and One Adventures • The Sword of the Dales • Storm King's Thunder
Video Games
Secret of the Silver Blades • Gateway to the Savage Frontier • Pools of Darkness • Neverwinter Nights: Darkness over Daggerford
Board Games
Assault of the Giants
Card Games
AD&D Trading Cards 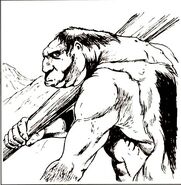 A drawing of a hill giant.

Hill giants on the offense.

A Hill giant from the NWN Editor.

Two hill giants hunting a pair of leucrottas.
Add a photo to this gallery