This article is about the undersea creature. For the flagship of the Horizon Armada, see Hippocampus (ship).

They had the body of a horse, a scaly fish's tail, and fins instead of hooves or a mane.[2][4] Their front sides were covered with small scales, with larger scales at the rear.[4] Their skin was colored with ivory, blue, or green according to the shades of the sea.[6]

Hippocampi could breathe either salty or fresh water and even normal air for a short period of time. They were also proficient in swimming and deep diving,[6] moving very swiftly.[4]

Being wild and desiring to keep their free spirit, hippocampi were not easily tamed, but they could be trained to carry and fight with a rider. Being good creatures and skilled judges of character, they would more commonly serve good causes and refuse to assist any creature they considered evil or hostile.[2][3] They were excellent racers and good mounts.[2] They served as a favored steed for sea elves[7] and tritons[2] and could even be the special mount of an aquatic paladin.[8]

Hippocampi lived in pods, made up of one to three stallions and around eight to twenty mares. In each pod, a stallion is designated as leader through custom and/or rituals. Each stallions had its own harem that are compound with mare that had chosen to join it and remain in it for life generally.[5]

They would often ally with tritons which, in return, would keep the hippocampi's eggs in their castle.[5]

In case of great danger or crisis, several pods could gather to join their effort against a common threat. A gathering of this sort could be compound of thousands hippocampis.[5]

In the Unapproachable East, hippocampi could be found in the lakes of Rashemen[9] and around the waters of Aglarond.[10]

Hippocampi were generally known to speak their own language,[2][4] as well as Aquan,[2] though like any intelligent creature they were capable of learning others if properly trained.[4]

Among aquatic mounts, they were considered to be one of the most prized.[4]

Hippocampi were sometimes found as courtiers in the palace of Kalbari al-Durrat al-Amwaj ibn Jari.[11]

The Happy Hippocampus was an inn in the port of Procampur.[13]

The sea unicorn, a hippocampus with a glowing horn, was a myth among worshipers of Sashelas, as a symbol of great changes. This was especially true for the Lances of the Sea Unicorn, who were the clergy and warriors of the Sharksbane Wall.[14]

The village of Lathtarl's Lantern had a temple decorated with the mastheads of wrecked ships, some of which were known to resemble hippocampi.[15]

Those who specialized in sea-based magic could summon a hippocampus with the spell monster summoning IV.[16] 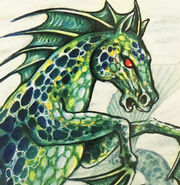 A close-up look at a hippocampus.

A hippocampus from the side.

A depiction of a hippocampus from the 1st edition accessory AD&D Monster Cards.

A group of hippocampi being ridden by aquatic elves, while the interloper deity Poseidon stands to the side.

A triton rides a hippocampus into combat.

Upper left: A group of tritons riding a hippocampus.
Add a photo to this gallery

Retrieved from "https://forgottenrealms.fandom.com/wiki/Hippocampus?oldid=654375"
Community content is available under CC-BY-SA unless otherwise noted.