A hive mother, also known as the ultimate tyrant or just ultimate, was a very rare type of beholder capable of magically dominating other beholders, including eyes of flame, eyes of frost, death tyrants, bloodkiss beholders, and gazers.[2]

These beholders were significantly larger and of genius intelligence. Despite the nomenclature, Hive mothers are asexual and genderless like other beholders.[1]

They were fanatical and had natural resistance to magic. Hive mothers had enormous mouths for devouring foes. Some retained the signature eye rays which are individually capable of devastating magical attacks,[1] but others have been documented without the stalks, instead having the eyes embedded in its upper body.[2]

The central, dominating eye of the Hive mother generates a 240 foot antimagic cone which suppresses all magical and supernatural effects.[1]

There was a hive mother inhabiting one of the lower levels of Watcher's Keep as of the Year of the Gauntlet, 1369 DR.[3] 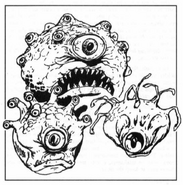 Left to right: a beholder, a hive mother, and an orbus.
Add a photo to this gallery