This article is about the independent city-state of the Vilhon Reach. For the Lost Kingdom of ancient Netheril, see Hlondath.

Hlondeth or the City of Serpents was an ancient and powerful independent city-state at the end of the Vilhon Reach.[1] The city had a longtime association with serpents, and was ruled by the Extaminos family, with mixed blood that was not quite human.[2] Hlondeth was a well-run, organized, and efficient city-state.[3]

In 1373 DR the matriarch of the Extaminos family was Dediana Extaminos who had a snake's tail instead of legs. She ruled over the city with a light hand. Her mate was First Consort Ssibalentanamas, a spirit naga cleric of Sseth, who was also known as First Keeper of the Sacred Eggs, his main task was guarding the yuan-ti brood chambers.

The people of Hlondeth valued trade, ritualized combat, and nature. Magic-users were treated with suspicion in Hlondeth, and the city's kobold population was kept in an enslaved state.[2]

Hlondeth was a very prosperous city and active in trade and commerce with its surrounding cities, being one of the busiest ports in the Vilhon Reach. It transported goods into the lower half of nearby Turmish and traded actively with the tribes and city-states of the Shining Plains to the west.[5] Hlondeth was always eager to recruit adventurers to serve as caravan guards and was known for its extensive patrols. [6]

Very tense for quite a while, for Dmetrio Extaminos son of Dediana Extaminos was in love with the baron's eldest daughter. While he is yet unsuccessful, no-one has sent him packing.[7]

Founded in 50 DR, Hlondeth is established as an important port at the end of The Halondar, a long road that runs through Turmish that connects Hlondeth with Alaghôn. Initially ruled by a series of human warlords of the Gestin family.[8]

In 145 DR, the city came into conflict with the armies of Dempster Turmish, who brought an army from Alaghôn to bring the city under siege. The city was able to outlast this siege however, as the ruling warlords were able to hire pirates to battle the Turmishan navy and bring in supplies in exchange for safe harbor within the city. Additional aid from an adventuring company known as the Company of the Howling Harpoon helped the city ward off a second attack, and Dempster's death in 150 ended Hlondeth's hostilities with Turmish.[citation needed]

The hundred year period following the conflict was known as Calmwaters, a period in which trade and civilization flourished in the Vilhon Reach. The eruption of Mount Urguth brought an end to this period in 257 DR, allowing house Illistine of Chondath to seize power within the city.[citation needed]

In 527 DR, an army of kobolds under the banner of the Tattered Cloth Legion, commanded by the drow queen Nathglaryst of Undraeth, attacked the city. Many of the city's residents took refuge in the family compound of House Extaminos, and the kobolds themselves were dispersed when members of the house unleashed swarms of snakes against the kobolds. House Extaminos would spend the following centuries cultivating a devotion to Sseth in his guise as Varae, as well as interbreeding with Yuan-ti.[citation needed]

In 614 DR, members of House Extaminos orchestrated a rebellion against Chondath, gaining independence for Hlondeth. It was at this time that the House re-consecrated in the name of Varae, a change which was met with middling acceptance from the populace. By 1020 DR, House Extaminos had begun openly ruling the city.[2]

Hlondeth was known for its distinctive architecture. The wide use of beautiful, emerald-hued stone from nearby quarries and the city's tall, graceful arches and coils gave the city a unique appearance. At night the city was illuminated by magical light and natural sources. The view of the city at night was reflected off the nearby waters of the Vilhon Reach. The city also eschewed stairs in favor of ramps and poles, to be better used by the Yuan-ti.[9]

The great Aviary of Extaminos was claimed to be the most wondrous building in the city. It was completed in 1368 DR.[4]

A building of central importance in Hlondeth, this cathedral served first as family dwellings for the Extaminos family, then as a shrine of Ilmater, and finally as a cathedral of Sseth in his guise as Varae. It took 130 years to build, and was surrounded by a wall shaped like a two headed serpent.[2] 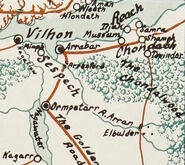 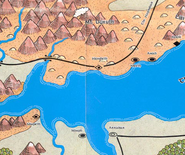 Retrieved from "https://forgottenrealms.fandom.com/wiki/Hlondeth?oldid=652929"
Community content is available under CC-BY-SA unless otherwise noted.