Hobgoblin (English)
Hobgoblins were larger, stronger, smarter, and more menacing forms of goblinoids than goblins, but not as powerful as bugbears.[10]
“
They break before our shields, they fall beneath our blades;


Their home is ours to conquer, their children our slaves.
Acheron! Acheron! Victory is ours!

”
— The translation of a hobgoblin war chant[1]

“
Hobgoblins are relentless soldiers that cleave to rigid tactics and orders. I fear their less-predictable scouts and spies more.
”
— Elminster's notes in Volo's Guide to Monsters.[11]

By and large, hobgoblins, like their kin, were considered to be evil creatures and often met this expectation. While goblinoid society was typically cruel and harsh, some individuals escaped it to carry on lives of virtue. The few who took this risk and succeeded often met cautious praise and acceptance from outsiders. Those that managed to escape goblinoid society, however, were continuously plagued by their goblinoid nature. Though hobgoblins were not necessarily evil, they were prone to violence and hot tempers, and often found it difficult to be truly altruistic.[3]

When provoked, which was not a hard task, hobgoblins were vindictive creatures who took glee in causing pain to those that injured them. Those hobgoblins who overcome this nature often managed this because of the rewards they found in serving good, rather than evil.[3]

“
Hobgoblins have a code of honor. Its details vary from legion to legion, but it's always brutal.
”
— Volo's notes in his Guide to Monsters.[12]

Hobgoblins were mostly found in communities where they were in command of either goblins or bugbears, or sometimes both. The most civilized goblinoid communities were ruled by the race. This was in large part because hobgoblin society was more industrious and less savage than that of goblins or bugbears.[10] Though bugbears sometimes took control due to their raw strength, most such communities were ruled over by the strongest hobgoblin, who served as the warchief.[13]

Hobgoblins had a long tradition of mastering and breeding the creatures of the world into slaves of various sorts. Many, for instance, enjoyed working with wolves or worgs. Similarly, many drake breeds were first bred by hobgoblins. Some even believed hobgoblins carried this practice on within their own race, creating the goblins and bugbears in such a manner.[10]

Hobgoblins were immensely protective of their tribe's reputation and military status, so much so that meetings between different groups could turn violent if proper protocol was not followed. However, though hobgoblin tribes were territorial and egotistical in nature, they often united for a common purpose, such as war against non-goblinoids.[13]

Hobgoblins once had their own pantheon, however, Maglubiyet, the god of war and rulership, killed most of the gods. Since then, he was the chief deity of hobgoblins. However, Nomog-Geaya, the deity of war and authority, was considered their patron deity, and many followed Bargrivyek.[14] After the Spellplague but prior to the Second Sundering, Maglubiyet was an exarch of Bane.[15][note 1]

Hobgoblins were warriors by nature and prefered martial combatants to those who draw on magic. Those few spellcasters who were to be found were expected to work well with soldiers.[13]

A depiction of an armored hobgoblin from Sword Coast Legends. 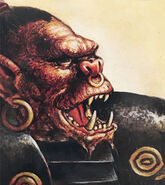 A hobgoblin, up close and personal. 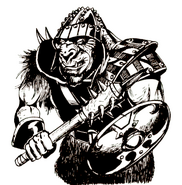 A hobgoblin from 2nd edition. 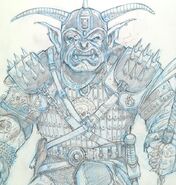 Concept art of a well-armored hobgoblin from Baldur's Gate (game). 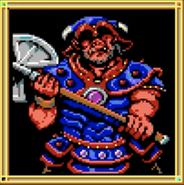