Many levels,
including cellars

Undead Formerly: dwarves
The House of Stone, also known as Stoneturn, was an immense square tower on the eastern edge of the Ardeep Forest. By the Year of Wild Magic, 1372 DR, it had been abandoned for at least a decade.[1][2] Rumors of treasure hoards and artistic wonders drew adventuring bands despite its deadly reputation.[3]
“
An elf calls the deepest wood his own,


A human everywhere may roam,

The House of Stone was approximately one hundred miles (one hundred sixty kilometers) east-northeast of Waterdeep, south of the River Dessarin, and not far from the eastern edge of Ardeep Forest, circa the Year of Wild Magic, 1372 DR.[6][7]

The exterior and main structure of the fortress were built with huge blocks of brownish gray stone.[note 1] The walls were 25 ft (7.6 m) thick, or more, but the roof and some ceilings were much less robust. The squat tower was square with a flat roof.[8]

The interior of the keep was best described by the late adventurer, Raethrus of Myratma, who characterized it as "disordered", meaning that all the rooms were of different sizes, shapes, architectural styles, and decorations.[8] It was impossible to determine how many floors the tower had because the rooms, halls, temples, towers, and atriums had varying ceiling heights and connected in a three-dimensional maze of stairs, ramps, lifts, secret doors, and hidden passages. In addition, some walls were movable and some rooms could be raised or lowered, so portions of the floor plan were not static. Time and conflict also took their toll on the structure—sections of the roof were broken, crumbling, or completely collapsed, and some rooms were pillaged, looted, or torched.[1][3][9]

Despite the depredations of orcs and treasure hunters, the House of Stone contained many decorative fixtures that were either too large to remove or were part of the supporting structure, primarily pillars and statues carved in the likeness of heroes and foes, including non-dwarven races such as elves, humans, minotaurs, and orcs. Reports spoke of secret storage compartments hidden in the ornamentation, some even big enough to hold or hide a medium-sized creature.[8][9] Many of the walls once held carved murals and bas-relief sculptures of battle scenes depicting dwarven knights vanquishing various monsters. Most of the accessible ones were appropriated by adventuring bands hired by Waterdhavian nobles and became decorations on the outside of their villas and townhomes.[2]

In the center of the House of Stone was Stoneturn Well, a source of potable water near the surface that bubbled up from a subterranean lake. The original keep was built to protect this valuable resource and its name became synonymous with the well's name. Over the years, the dwarves expanded the structure into the formidable edifice that became a bulwark against (and a trap for) the orc hordes that periodically came raiding down the River Dessarin. The expansion also protected the underground granaries[10] that were dug a safe distance away from the water shaft, although foolish intruders managed to breach at least one of these storage caverns and flood it with well-water. Some of the cellars also connected to the Underdark through breaches made from below.[9] There was also an underground passage, called "the Long Run" by the elves of Laughing Hollow, that connected the House of Stone to Ardeep Forest.[2]

By 1372 DR, the House of Stone had been left unguarded for at least a decade and was roost to all types of carrion-eating birds that fed on the fallen adventurers that attempted to probe its secrets. The portions of the citadel open to the sky were dank, dirty, and devoid of anything of value except what could be found on the corpses of previous visitors.[2] Deeper inside, the rooms were typically dry, dusty, decaying, and equally empty.[9]

The exterior walls were so thick as to be all but impenetrable but there were obvious ways to get inside so the orcs would rush in when the defenders retreated, only to be slaughtered in stone-walled courtyards with portcullises released to cut off their escape. Other entrances led to the maze of rooms that were riddled with brutal, deadly traps of the crushing and impaling varieties—rams that burst from passages when doors were opened, heavy doors that were deceptively unhinged to fall on the opener, tipping floors over pits filled with spikes, and so on—all dwarven-made of stone to last for centuries. Those that did manage to retreat were typically met with arrows, green slime, and falling logs, all launched from the battlements.[2]

Entering or exiting the House of Stone by magical means, such as teleport and similar methods, had a significant chance to go awry, depositing the unlucky individuals in a random location, possibly elsewhere inside the House. Elminster, the Sage of Shadowdale, noted two such cases: a war dog–guarded garden in Waterdeep and a treacherous rooftop in Secomber.[9]

The only "safe" passages were those inside the blocks that formed the outer walls. They were uncomfortably narrow for human-sized creatures but they connected to the storage cellars by vertical shafts and allowed the dwarves to outflank invaders without having to pass through the trapped rooms.[8][9]

The House of Stone began construction in the Year of the Cantobele Stalking, 342 DR, by the dwarves of Dardath under the leadership of Turgo Ironfist.[5][11] Originally, Stoneturn was built to protect Stoneturn Well, a source of drinkable water in the region.[1] In the time of Phalorm, the House was expanded and set up as a massive trap to be used against marauding orcs that periodically came down the River Dessarin on a rampage. Mounted elven archers would provoke the orcs to chase them back to the House, whereupon the orcs would be killed in great numbers as they blundered into a seemingly endless series of traps.[2]

After Phalorm's fall in the Year of the Lamia's Kiss, 615 DR,[12] the remaining moon elves of Ardeep Forest kept watch over the House of Stone using flying steeds and archers with swiftsleep-tipped arrows, turning back all comers but giving no reason for doing so, until their population dwindled to the point that it became infeasible to guard it any longer.[9] Some years prior to the Year of Shadows, 1358 DR, the archmage Eroan of Ardeep Forest allowed Mintiper Moonsilver to approach the House. He reported to the Lords of Waterdeep that the gates were forced open, apparently by a hill giant whose corpse was still rotting on a huge claw of stone spikes that had sprung into the courtyard. Mintiper was advised that it was wise to assume the whole building was full of such traps.[10]

The Retreat of the Year of Moonfall, 1344 DR, saw the elven population of Ardeep Forest drop precipitously and continue to decline until they could no longer effectively guard the House of Stone.[9][13] After the House was abandoned, it became a beacon to countless adventuring bands chasing tales of treasures that remained undiscovered. However, the place was so deadly that carrion birds roosted nearby almost year-round, never going hungry for long.[2]

Local legends testified that the House still held gems, gold, and an armory of weapons left behind by the dwarves,[10] guarded by magical wards and undead dwarven warriors.[1][3] Elminster noted that at least two swords, one that could shoot lightning bolts and one that could take its wielder through a dimension door, were carried into the House at some point in its history and, to his knowledge, never reemerged. He also described a small set of ornamental plate armor, made by the elves for the princess Iravralee, that was covered in sapphire cabochons and intricate groove-work.[9]

Reports from survivors of expeditions into the House describe silent, harmless phantoms of humans, elves, and dwarves that run past, armed and in haste, as if to a battle.[1][3] Another corroborated story told of a chamber holding a small forest of trees wrought entirely of silver. The leaves were said to jangle and chime when gently disturbed, but turn to dust if broken off. Items made of silver brought into contact with one of these trees became immediately cleansed of all tarnish.[3][9]

The House of Stone was the subject of ballads, poems, and jokes across the Sword Coast North and these suggested various wild stories, possibly based in reality, of the House being the entrance to a city inhabited by the undead, or beholders, or a company of bandits all physically corrupted in horrible ways by magic.[8]

By 1372 DR, the ruins were overrun with undead including a great many ghouls and shadows.[1] More than one entrance to the Underdark could be found within and its denizens frequently wandered up into the building.[9]

Adventures
Referenced only
Scourge of the Sword Coast 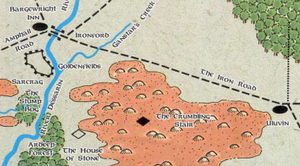 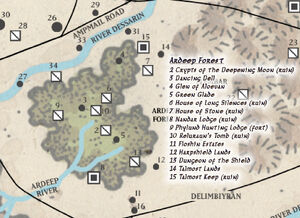 Detailed map of the Ardeep Forest and environs. The House of Stone is #7.