Hydra (Greek)
A hydra (pl: hydrae[4][5] or: hydras[1][3]) was reptilian magical beast that had anywhere from five to twelve heads.[3] And very rarely may even have up to fifty heads.[1]

A hydra was not very intelligent, about as much so as an animal. Hydras were usually neutral in alignment.[3]

A hydra was an especially deadly monster, since every time a head was severed, two new ones grew in its place.[3]

In the late 1340s DR, the explorer Hadley Erridge of Thunderstone in Cormyr suggested to his neighbor, the enterprising and prosperous farmer Del Geery, that he get a hydra to scare off the pests plaguing his crops. Geery agreed to finance Erridge's expedition into the Vast Swamp to capture a live hydra. Two months later, they returned with an adult hydra in an iron cage. Erridge released the hydra and it rampaged about the farm, scaring away all the animals within a few days. However, despite what Erridge said about the hydra returning to the swamp when it ran out of prey, it instead stuck around and began building a nest by the pond. The hydra was, in fact, pregnant. Outraged, Geery gave Erridge the sack then hired a group of warriors to slay the hydra. Afterwards, he hired the best rangers and wizards in Cormyr to help him discover the uses to which he could put a hydra carcass, intending to use every part of the beast and recover his losses. He was so successful at this new trade that he began to fund new hydra-hunting expeditions in the Vast Swamp.[7] By 1367 DR, he'd earned a reputation and a fortune in the hydra trade.[7][8]

A pregnant hydra preparing to give birth would build a nest for this purpose. It dug a pit beside a pond or body of water, then lined it with sticks and weeds.[7]

Hydras were typically found in the marshes of regions with a temperate climate.[3]

Many hydras were known to inhabit the Forest of Wyrms.[11] They also were quite common in the jungles of Chult.[12]

Some individuals of most types of hydras were servants of the dark Chultan demigod Eshowdow, and their appearance was considered a good omen by his followers.[13]

The enterprising farmer and hydra-hunter Del Geery developed a number of useful agricultural products from the body parts of the hydra, as follows:[7] 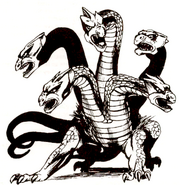 A hydra from 2nd edition. 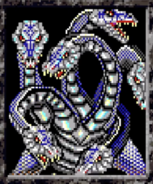 A depiction of hydra from Forgotten Realms Unlimited Adventures.