Forgotten Realms Wiki
Register
Don't have an account?
Sign In
Advertisement
in: Articles in need of citations, Items, Scimitars,
and 19 more
English

Edit
This article is about the sword. For the dragon, see Ingeloakastimizilian.

2nd / 3rd
Icingdeath was the nickname for Drizzt Do'Urden's main right-hand scimitar.[1][note 1]
“
...uncovering a gem-encrusted sword pommel, its black adamantite hilt masterfully sculpted into the likeness of the toothed maw of a hunting cat.
”
— The Crystal Shard

The hilt of this scimitar was black adamantite and the blade was made of silver with a diamond edge.[2] Its pommel was shaped like the head of a hunting cat.[3][note 2]

Icingdeath was a +3 scimitar.[1][4] It had the powers of a frost weapon. When the sword detected or fed on fire, it started glowing with a pale blue shimmer.[1]

It was also a frostbrand weapon.[4] The weapon absorbed fire and heat, protecting its wielder against fire.[5] It also had the ability to extinguish magical fire. For example, it extinguished a portion of the wall of fire conjured by the powerful demon, Errtu[6] and completely negated Valindra Shadowmantle's fireball in Gauntlgrym.[7] However, it could also be set on fire in order to harm trolls, though this was only when the magic of the blade was being repressed.[8][note 3]

In the Year of the Worm, 1356 DR, Drizzt Do'Urden, famed hero of the Companions of the Hall, found the blade in the treasure pile of Ingeloakastimizilian the white wyrm, better known as "Icingdeath", and the weapon's namesake. The barbarian Wulfgar and Drizzt killed the dragon and found the scimitar after a dramatic battle.[2] 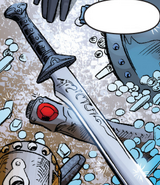 A depiction of Icingdeath from The Legend of Drizzt: The Crystal Shard #2