Abyssal
Immoliths were undead demonic entities that randomly arose from the spirits of deceased demons. After having been slain and returned to their foul plane, the once-separate demonic spirits fused together in the fall back to the Abyss that had spawned them, given new form and burning hatred.[1]

Immoliths appeared as inhuman skeletons as tall as hill giants with horned heads and a host of clawed hands, surrounded by a blazing pillar of fire.[2][1]

Among the host of cruel and depraved Abyssal entities, few hated the living more than immoliths.[3]

Immoliths were perpetually surrounded by flames, and foes that got too close were likely to catch fire. Fittingly, fire could not harm them (nor could diseases or poisons) although radiant energy was particularly lethal to them. They attacked with their claws, grabbing at enemies to bring them closer to their burning bodies while negating the fire resistance of their victims.[1]

Immoliths could deliver what was called a deathfire curse to their enemies, which slowed them down and caused them to catch fire. Every few seconds they could infuse themselves and any nearby undead with new vigor.[1]

Immoliths issued their curse as soon as possible in their fights to slow down their opponents before grabbing them and pulling them closer to their flaming bodies. If movement was unneeded, they simply used more curses and kept doing so until it was, healing themselves and their undead allies whenever possible.[1]

Due to their hatred of the living, immoliths were often found with other undead, such as liches, vampires, and horde-dwelling ghouls. They could also be found with other fiends, such as mezzoloths and vrocks,[3] or fiery beings like azers.[4] 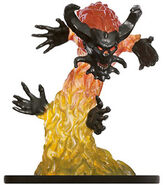 An immolith, as depicted in the D&D Miniature's set "Dungeons of Dread."