The true history of the ixzan was lost in the mists of times. About their origin, there were three main theories. The most common told that the ixzan were simply a subterranean offshoot of the ixitxachitl, similar to the kinship of drow and duergar to elves and dwarves. The second told the opposite, that there was an ancestral race in the Underdark long ago from which derived ixzan, ixitxachitl, cloakers, lurkers, mantari, miners (forest trappers), and possibly even sinisters (which many considered a kind of bat). After ixitxachitl and miners migrated out of Underdark, all the other races, including ixzan, remained in the same terrain. A third hypothesis, preferred by a few sages, told that ixitchatchitl originated from the surface seas, and for an unknown reason some migrated down into the Underdark. Here, affected by Underdark radiation, emerged the ixzan.

Ixzan history after their origin was also nebulous, thanks to their oral transmission of history and the influence of the Ilxendren clergy. Two events however were considered semi-historical by most: the Great Flood and the Revelation of the Demonray. The first told that the scattering of the ixzan race happened as a result of a great flood; sages that believed this story tried to explain the flood as being caused by rapid melting of a glacier, the opening of gates to the Elemental Plane of Water, or the sudden draining of a great lake. The second story told of the apparition of the god Ilxendren, which unified all ixzan under his worship. Previously, ixzan had worshiped many dark powers, usually Dagon, Demogorgon, and even Panzuriel, but afterward virtually all ixzan adopted the worship of Ilxendren. This also caused the birth of the first vampiric ixzan.

Ixzan communities were usually divided along caste lines. Typically, the young were tutored by special instructors in the way of the cleric or the wizard. Ixzan wizards could intuitively identify individuals with a potential for magic and guarded them. Vampiric ixzan always rose to the tops of their communities. Ixzan communities were governed by an oligarchy of priests and wizards.

The ixzan had virtually no natural enemies. Their tendency to isolate their community usually allowed them to avoid conflict with humanoid races. The ixzan were on good terms only with aboleth and kuo-toa. In relations with aboleth, the aboleth always had the upper hand, with the kuo-toa the ixzan were dominant. Many ixzan lived among kuo-toa.[3] 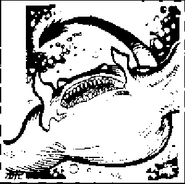 Retrieved from "https://forgottenrealms.fandom.com/wiki/Ixzan?oldid=564323"
Community content is available under CC-BY-SA unless otherwise noted.