Any[3]
Jackalweres were treacherous antherions, jackals able to assume the form of a human. They used this power to lure in those that took pity on them before viciously slaughtering them.[1]

In a jackalwere's true form, they were indistinguishable from a regular jackal, standing at 3 feet (0.9 meters) tall.[4] When disguised as a normal humanoid, they were somewhat haggard but otherwise indistinguishable from normal members.[3][1] Their humanoid forms were not strictly fixed and could be changed after they returned to normal.[4][1] When donning their hybrid form, they were fearsome monsters with a coat of fur and jackal's head but a bipedal figure.[3] In both human and hybrid forms, they normally stood 6 feet (1.8 meters) tall.[4] The true form of a a jackalwere would be revealed upon its death.[1]

While in their jackal forms, jackalweres were bolder and more aggressive than regular jackals.[3] They were pack creatures that preferred the company of jackals and other jackalweres as opposed to other beings. The outward displays of helplessness often seen in their human forms were ruses intended to lower their victims' guard.[1] Due to their innate link to a trickster deity, jackalweres were born liars.[1][2] Any attempt by a jackalwere to be truthful caused them literal pain, so much so that it was visible to the perceptive eye.[1]

Jackalweres could shift between their three forms at will depending on the situation. Their humanoid forms possessed no significant combat advantages, as opposed to their jackal or hybrid forms. Without a weapon, jackalweres were reliant on the rending power of their bestial maws, as their claws couldn't be used as effective weapons. This was rarely a problem in any sense, as normal folk could not harm a jackalwere without magical or silvered weaponry.[1]

Regardless of their form, the gaze of a jackal was incredibly dangerous, capable of lulling the unsuspecting into a ten-minute-long trance.[1] This power had to be used sparingly as it possessed numerous crippling limitations. Their slumber-inducing stare only worked on those in a state of calm, meaning that those the jackalweres frightened, excited, or provoked would be too mentally stirred to be put to sleep.[4] It also didn't work on other jackalweres or any entity incapable of being magically charmed. Those that resisted were generally not able to be hypnotized for some time, and it was always possible to shake the victim awake.[1]

Because of the limitations of their gaze power, jackalwere could not merely rush their opponents and hope that it worked. Instead, jackalweres first would attempt to lure their victims into a false sense of security before using their powers and dragging them off. In the event this failed, jackalweres would be left with two options: to flee from the potentially agitated target, or attempt to quickly savage their prey if they seemed weak.[4] In order to make a hasty retreat, a jackalwere might attempt to use their sleeping powers on an oblivious foe.[1]

When in combat, their thirst for blood often led them to attack with their fangs rather than weaponry on hand, although they still had common sense and would use weapons when appropriate. Due to their love of tearing flesh, they had a strong preference towards weapons that could cut and slash. Once an opponent had fallen to a jackalwere, it was normally not long before they feasted on the corpse, regardless of their form.[4]

Jackalwere packs usually consisted of a mated pair of deceiver jackalweres, a small group of younger jackalweres known as bravos, and mobs of more vicious jackalweres called harriers. Harriers were the most feral of jackalweres, who abandoned the subtlety of their more cunning kin to embrace their wild sides. Still pack animals at heart, they only fought in large groups, more concerned with aiding their superiors than attacking alone. Harriers were either the youngest of their pack or survivors from a fight between packs. Bravos acted as servants and menial workers, resenting their low status but unleashing their inner beasts when allowed, only attempting complex strategies when commanded to. Deceivers were the most cunning and patient jackalweres and normally their leaders, playing the long game in order to lure their inevitable victims into a sense of security before calling upon their fellows to help slaughter them.[2]

Beyond the Prime Material plane, jackalweres could be found in the Domains of Dread.[6]

Religious jackalwere were often more civilized than their traveling kin, and more likely to be found in the company of other beings. They were often found with the followers of Asmodeus, among the faithful of Zehir, or in any other cult that worshiped gods of deception and treachery.[2]

Jackalweres rarely operated outside their own circles, preferring the company of their own kind as well as jackals. Underneath the influence of a jackalwere, jackals became fierce and loyal beings, traveling with their masters in groups of up to six and hunting rather than scavenging.[4] Jackalweres could be found under the service of lamias, kidnapping humanoids to serve as their master's slaves or fulfill some other nefarious role.[1] They only ever worked under humanoids if they were both completely morally bankrupt, and allowed the them an opportunity to spread even more carnage than normal.[4] In the event where jackalweres had to travel in human form, they normally hired mercenary forces consisting of races that they found unappetizing in order to avoid revealing their true natures.[1] Such races could include the tough-skinned half-orcs and goliaths or the metallic warforged. Although they were mostly known to travel along beaten paths, they sometimes established themselves in small remote areas rather than wander the roads.[2]

In order to mate jackalweres had to return to their natural forms, with the result being a litter of 1–4 jackal pups produced by the female jackalwere within five months. Although they could breed with normal jackals, the offspring would be relatively normal jackals, if strangely aggressive. Only when two jackalweres bred would the result be young jackalweres. Pups were normally hidden from outsiders, but when found were declared to be pets.[4]

Jackalwere young were indistinguishable from normal jackal pups, and grew especially quickly. It appeared that jackalweres aged at a rate triple to that of humans, with a three-year-old jackalwere appearing like a nine-year-old human child. After becoming two years old, jackalwere pups were no longer locked into their first form and could assume their hybrid state. At three years old, their jackal forms became fully grown and they were capable of assuming human shape.[4]

The origin of jackalweres was generally agreed to have been the result of magical tampering by a powerful trickster entity. Earlier accounts told of a battle between primal humanoids and animals fighting for survival in a world ravaged by the war between gods and primordials. A once great nation of intelligent, primal jackals, having been left in ruins after a series of conflicts with an ancient human tribe, held only a few survivors from the conflict. After howling in anguish, fear, and rage, the primal spirit Dark Sister, otherwise known as Whisper, heard their cries and bestowed upon them her gifts for deception and roguery.[2] In more recent versions, however, jackalweres were far more demonic in nature, having been uplifted by the demon lord Graz'zt from normal jackals and given both speech and transformation abilities. Graz'zt supposedly empowered them in order to serve his lamia servants rather than for their own benefit.[1] 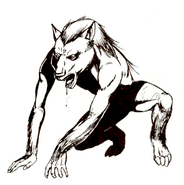 A jackalwere from 2nd edition.