Edit
This article is about the half-elf. For the genie, see Jaheira (genie).
This article or section is about elements from the Video games are considered canon unless they contradict content in some other Forgotten Realms publication.

Fighter/druid
Jaheira was a half-elf druid of Tethyrian noble descent who served as an agent of the Harpers, along with her husband Khalid, during the mid 14th century DR.[1][2][3]
“
This city is a blight on the landscape! 'Tis better to have let the land grow wild!
”
— Jaheira, regarding cityscapes of Faerûn

She was fairly young for a half-elf as she was still a child as of the Year of the Bright Blade, 1347 DR.[1]

Jaheira was strong-willed and resolute in her convictions whenever she spoke to others. She believed the only way to protect the natural world of Faerûn was to take direct action.[1] She had a acerbic wit and often demonstrated a flippant attitude towards death.[3]

Despite her boldness, there were certain events in Jaheira's life that gave her a great sense of doubt and consternation.[3]

During their time with the Harpers, Jaheira and Khalid became good friends with the sage Gorion and were acquainted with such people as Elminster.[1] Throughout their travels together Jaheira became quite close with Imoen, though at times she saw the young mage as childish and naive.[3]

Jaheira had a very different personality than that of her husband. Jaheira was bold and willful, almost to the point of stubbornness, while Khalid was nervous and often lost his wits in battle. Regardless the two were very much in love with one another.[1][2][3][note 1]

As a druid, Jaheira could take the form of several animals, including that of a wolf or bear. From her time spent as an agent of the Harpers, she had access to the spell Harper's call.[3]

When casting druidic magic Jaheira felt different emotions depending on the nature of the spell. She often felt serene when casting healing magic or rage if a spell was especially harmful.[4]

Jaheira was born in the 14th century into a noble Tethyrian family aligned with King Alemander IV. She was still still a child during the Ten Black Days of Eleint on the eve of the Tethyrian Interregnum.[1]

Jaheira was orphaned when her parents were killed by a mob of angry peasants. Fortunately, she was saved by one of the serving girls during the uprising, fleeing family's castle with her to the Forest of Tethir. Soon after, they met an enclave of druids, that later accepted Jaheira into their community. She took on the role of a druid in service to the Oak Father Silvanus.[1][note 2]

At some point Jaheira met Dermin Courtierdale, the man who introduced her to the Harpers and mentored her in the ways of their teachings.[3] While with the Harpers, Jaheira met and fell in love with Khalid, a fellow half-elf who hailed from Calimshan. Despite the stark contrast in their characters, the two married in short time.[1]

At some point Jaheira and her associates exposed the Calishite businessman Baron Ployer as a breeder of slaves, destroying his reputation within the realm.[3]

In the Year of the Banner, 1368 DR, Jaheira and Khalid were sent on behalf of the Harpers to investigate the iron crisis and the Nashkel mines. They stayed at the Friendly Arm Inn and awaited the arrival of their friend and fellow Harper, Gorion. Unfortunately, Gorion was slain as he tried to smuggle his adopted son Abdel Adrian out of Candlekeep to safety. Jaheira and Khalid welcome them and shared their plans to investigate the troubling goings-on that afflicted the Sword Coast.[1][note 3]

After the Iron Crisis was put to a stop and the schemes of Sarevok Anchev were foiled, Jaheira and Khalid traveled to Boareskyr Bridge. They were tasked with investigating the growing Shining Crusade and its leader, the charismatic Caelar Argent. When the crusade invaded, Khalid led the nearby townsfolk into Bridgefort while the chaos left Jaheira stranded outside.[2]

In order to get inside the fort, Jaheira sought an abandoned abandoned temple of Bhaal that had recently been repurposed by Cyricists. During her journey she picked up the warrior-skald Voghiln and reunited with her ally who was then regarded as the Hero of Baldur's Gate.[2]

Following the defeat of the Shining Crusade in the Year of the Gauntlet, 1369 DR, Abdel Adrian was framed for murder, briefly imprisoned in Baldur's Gate, and discreetly released from holding. Jaheira and Khalid were quick to join up with them once again, alongside their friends Imoen, Minsc, and Dynaheir. Soon after they set out from Baldur's Gate the adventurers became clouded by mist, and captured by a group of Shadow Thieves.[2]

Jaheira woke up in a dungeon deep beneath the city of Athkatla in Amn. Some of her fellow companions were also imprisoned while others, such as Khalid, had already been killed. Their captor was the elven wizard from Suldanessellar who had fallen from their grace, Jon Irenicus.[3][note 4]

In the Baldur's Gate series of video games, Jaheira is voiced by Heidi Shannon, sometimes referenced to as Hidi Shannon. 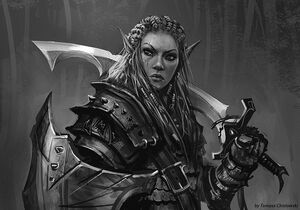 Fan art of Jaheira, by Takeda11