Jalynfein was a male drow wizard from Menzoberranzan, and was perhaps the most powerful spellcaster in the city. He carefully cultivated a reputation of insanity and zealous devotion to Lolth, but truly hated the tyranny of the Spider Queen and opposed all forms of slavery. However, he was far too intelligent and skilled in the magical arts to ever betray these inner thoughts. From his position of seclusion, he was able to use scrying spells to spy on events in the city, and would sometimes sell information if offered enough magical items, gems, or gold. [1]

Jalynfein maintained a private tower in Sorcere, the arcane school of Tier Breche. His tower was heavily protected by spells of great power, and stocked with all of the wealth of the Spider Mage. This included many magical items, caches of gems and gold (usually around 16,000 gp worth), and numerous healing potions. While in this secluded sanctuary, Jalynfein was virtually untouchable by any would-be attackers.[2]

Jalynfein had a disfigured face, which he covered with a featureless grey cloth mask. This was his most distinguishing feature, and apart from this very little was known about him; he kept himself immersed in mystery and protected by powerful spells, preventing anyone from spying on him by magical means or otherwise.[3]

Jalynfein was a mysterious but incredibly powerful wizard who kept himself well protected by magical means. He was very intelligent, a trait that allowed him to survive in the harsh society of the drow. The Spider Mage was reluctant to attack anyone until he learned who they are and where they're from. He was particularly interested in surface-world lands and the powerful wizards who dwelt there, and would even aid surface-folk in exchange for information on these lands. On the other hand, he was always alert for traps set by the high priestesses, and would not verbally betray his city, say ill against any House or priestess, or reveal his true feelings and interests.[2]

Jalynfein hailed from House Oblodra[4] In his youth, Jalynfein spurned a priestess of Lolth, who in fury slashed open his face and doused the wounds with a corrosive distillate of arachnid venom. His face became a purplish, bloated ruin resembling a fungus-growth. She imprisoned the now unrecognisable youth in her chambers, making him her slave. It is this experience that turned Jalynfein against the tyranny of Lolth, and against any form of slavery; he experienced first hand the cruelty of the priestesses, and suffered a life of servitude and entrapment. It was many years before he found a chance to take revenge on his captor; when he did, it proved fatal for the priestess. Jalynfein escaped from his prison and fled into the Underdark, vowing to himself to return when he had magic enough to hold his own in cruel Menzoberranzan.[1]

He returned only a dozen years later; where he went is a mystery - he will not speak of that chapter of his life, nor of how he gained his arcane abilities. All that is known is that when he returned, he was an accomplished mage, demonstrating this by besting three wizards at once in spell-combat, for the entertainment of a House Matron.[1] In truth he first went to the mystical library of Gravenhollow[4]

The nickname Spider Mage, as he prefered to be known, comes from a bizarre spell-like power conferred on him long ago by a Yochlol: a spider summoning spell that turned his face into a writhing mass of spider legs while it is in effect. He also went through a process of intentionally imbibing increasingly large doses of spider venom, earning him a false reputation as a sickly and diseased mage, but in reality giving him a natural resistance to almost all forms of arachnid poison.[1][2]

Once a day, Jalynfein could use his innate ability of Spider Summoning, with the side effect that his face was transformed into a writhing mass of long, spidery legs, lit by a flickering orange and purple faerie fire radiance. The Spider Mage was immune to most arachnid venom, and could unleash a burst of 24 Magic Missiles if he deliberately breaks a finger. He also had access to many magic items and has developed many new spells, including the 9th level wizard spell Web of Shadows. Jalynfein's innate abilities, combined with his considerable repertoire of spells and magic items, made him one of, if not the, most powerful magic users in the Underdark. His only rival in power was perhaps the archmage of Menzoberranzan himself, Gromph Baenre.[2] 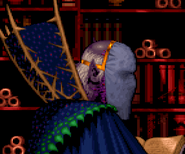 Jalynfein as he appears in the Menzoberranzan video game [5].

Deutsch
Community content is available under CC-BY-SA unless otherwise noted.