Jander Sunstar was a gold elf vampire from Evermeet who was swept to the Demiplane of Dread in 1098 DR.[4][2]

Jander was 5 feet and 9 inches (1.8 meters) tall[note 1] and weighed 130 pounds (59 kilograms). He had angular features but retained the noble countenance of an elf. Jander kept his wheat-colored hair long enough to reach his shoulder blades and it almost hid his ears. His skin was the color of pale gold and he had expressive silver eyes.[6] His left hand was withered and appeared burnt after contact with the Holy Symbol of Ravenkind.[7]

He would go about in public disguised as a leprous beggar in filthy cloaks, coating himself in stinking garbage to keep people away. He always wore gloves, both to hide his disfigured hand and so that his bare flesh would not touch plant life.[7]

Jander Sunstar was born to gold elf parents on the island of Evermeet. He was struck by wanderlust and headed to mainland Faerûn in search of adventure. He became a Hellrider out of Elturel and became friends with another Hellrider, Gideon who became a cleric of Ilmater from his experiences of fighting Tiamat in the hells.[8] They eventually became two members of the Silver Six and slayed a red dragon in Merrydale.[9] Whilst in Merrydale, the original pack of vampires that infested the area for years to come attacked. Jander was betrayed by a friend who had been transformed in the first battle between the Dalesmen and the vampires.[6]

Now a vampire himself, Jander was bound to the will of his new master, Cassiar, for over a century, but never surrendered his soul to his master's evil ways. He tried to survive on animals instead of humans but Cassiar's orders caused him to perform many evil deeds. Eventually, he managed to kill Cassiar in Mistledale in the middle of Marpenoth of the Year of the Open Tome, 892 DR with the help of his friend Rhynn Oriandis.[10]

He wandered Mistledale for a while, preying on bandits asleep in the wilderness but not killing them, just drinking a little from each in their group. One night though, the group he was following were alerted to his presence and he had to flee. When he stopped, he encountered the goddess Eldath, who offered him sanctuary in a holy grove of Silvanus. For as long as he didn't leave the grove, he would be a mortal elf again, though sunlight would still be deadly. He met a priest of Silvanus from a nearby abbey, coming to draw water from the sacred pool and the two became friends. The next night, wood and antlers were on the ground and, seeing it as a sign, Jander whittled them into statuettes of Eldath and other shapes, which he gave to the priest for his abbey to sell. Jander was extremely happy with this life until one night when he saw that the abbey was on fire. His new friend struggled to the grove saying that they were under attack but Jander should stay in the grove lest his divine absolution be revoked. Jander couldn't stand the sight of thugs beating his friend and left the grove, using his returned powers to slaughter them and saving the lives of many of the abbey's residents. But when he tried to return to the grove, he found that he could not—a painful, invisible barrier prevented him from returning and he doubted Eldath would offer him succor twice.[11]

Jander left the Dalelands and his memories behind that night, heading for Waterdeep. He settled outside of the city and when feeding on animals wasn't enough he fed on inmates at an insane asylum. He fell passionately in love with one of them though, a beautiful human woman named Anna, cursed to never age or be free of her madness. Anna fell deathly ill with fever in the Year of the Rose, 1098 DR and Jander offered to turn her into a vampire to save her but she refused. She died in his arms and in his rage and grief he slaughtered the other asylum inhabitants, setting the building on fire and swore revenge on whatever caused Anna's madness.[6]

The Dark Powers of the Demiplane of Dread heard his plea and whisked him away to their awful realm. Almost immediately, he came into contact and conflict with Count Strahd von Zarovich of Barovia. He learned that Anna was once known in Barovia as Tatyana and was the lover of Strahd's brother Sergei. Strahd murdered his brother and drove Tatyana to madness in his attempts to make her his. She threw herself into the ever-present Mists of the plane and an aspect of Tatyana arrived in Waterdeep, where she was committed and met Jander.[12]

Twenty-five years later, Jander and Strahd were bitter enemies—knowing he had found the object of his revenge, Jander came to hate the darklord of Barovia with all his heart. With the aid of two brave villagers, a priest named Sasha and a rogue named Leisl, he attacked Strahd, even offering Lathander his life in exchange for victory though both vampires survived the confrontation, severely wounded. Jander believed himself to be dying and asked his friends to let him see the sun rise one last time.[12]

Certain Faerûnian sages claimed that the Mists of the realm blocked the sun's glare from destroying Jander and he awoke in the area of the Demiplane known as Forlorn. He later became a vampire hunter by trade, sharing the hatred he still had for Strahd to all of his unwanted kin and if he ever returned to Toril, he would likely perform exactly the same service.[12]

Later, Jander returned to Toril and rejoined the Hellriders as a volunteer. He then participated in the invasion of Avernus known as the Ride, led by then-angel Zariel in the Year of the Bow, 1354 DR. The horrors of the plane, however, were too much for Jander and many of the Hellriders, who, in a blind panic, deserted and fled back through the portal to Elturel, sealing it shut behind them. The loss of her army sealed Zariel's fate, enabling her capture and later transformation into an archdevil.[1][13]

After spending years filled with shame and agony for his decision, Jander once again decided to end his existence by facing the sun, pleading for Lathander's mercy. However, he was again denied release and was instead condemned to become a prisoner back in Avernus, there to be held captive by Haruman, one of only two generals who had never left Zariel's side and had been later turned into a narzugon. Jander was crucified and impaled on an iron tree at Haruman's Hill, while his body was kept functioning by the work of stirges that injected him with the blood of other companions who had met the same fate.[1][13]

By the Year of Three Ships Sailing, 1492 DR,[note 2] Jander pleaded with any passersby to cut him down and release him from his torment, so his cursed soul might move on elsewhere.[1] 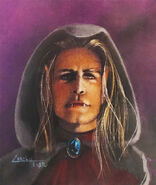 A portrait of Jander Sunstar from AD&D Trading Cards.
Add a photo to this gallery

Retrieved from "https://forgottenrealms.fandom.com/wiki/Jander_Sunstar?oldid=656498"
Community content is available under CC-BY-SA unless otherwise noted.