Author
Jeff Grubb is the author of several Forgotten Realms novels and articles. Among his more notable work is The Finder's Stone trilogy, featuring the popular character Alias, which he co-authored with his wife Kate Novak.

All of the following books were co-authored with Kate Novak. 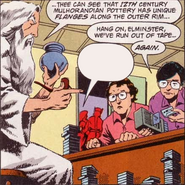 From left to right: Elminster discusses 12th century DR Mulhorandi pottery with Jeff Grubb and James Lowder in Everybody Wants to Run the Realms.
Add a photo to this gallery

Retrieved from "https://forgottenrealms.fandom.com/wiki/Jeff_Grubb?oldid=664075"
Community content is available under CC-BY-SA unless otherwise noted.