Lord of the End of Everything[1]
The Pitiless One[2][1]
The Forgotten One[1]
The Final Scribe[2]
Scribe of the Doomed[1]
The Bleak Seneschal[2]
Seneschal of the Crystal Spire[1]
Formerly:
Lord of Bones[3]
Lord of the Dead[3]
Protector of the Names of the Dead[3]
King of the Walking Dead[3]
Guardian of Tombs[3]
Judge of the Damned[3]
The Grim Reaper

A skull biting a scroll

Records of the dead

Knowledge of the ages
Read thoughts
Touch of death

Jergal (pronounced: /ˈdʒɛrgʊl/ JER-gul[10]), known by some as Nakasr, was the seneschal of the Kelemvor, Lord of the Dead, who he served just as he did Cyric and Myrkul before him. Jergal was the Lord of the End of Everything, Faerun's original god of death before he eventually ceded his position. Caring for little besides an orderly accounting of the fate of the world as it slowly sank into death, the Final Scribe was the one who kept the records of the ultimate fate of all the dead.
“
The throne is yours. I have grown weary of this empty power. Take it if you wish—I promise to serve and guide you as your seneschal until you grow comfortable with the position. Who among you shall rule?
”
— Jergal conceding his divinity and throne to the Dead Three.[11]

Under the guise of Nakasr and in the form that most of his avatars took, Jergal appeared as a member of an ancient alien race that resembled a cross between a humanoid and praying mantis. He was a wizened and insubstantial creature, mummy-like in appearance with gray, tightly taut skin. His elongated skull hosted bulbous, yellow eyes devoid of life and insectoid mandibles, as well as a nose and ears barely distinguishable from the rest of his head. His lengthy, claw-like hands and forearms were covered by a pair of white gloves, clutching a quill with fresh ink and a thick scroll covered in an intricate and incomprehensible script.[3][1]

Jergal was also known to take on the form of an old mortal man with a great white beard and sunken eyes that still held the spark of energy and betrayed his sharp intellect. He could take the form of any undead creature, amplifying the forms abilities with his gear and enervating touch unless the creature had such a power of equal or greater potency.[1]

Jergal's preferred manifestation was the simple sound of closing a book.[1]

No matter the manifestation, when Jergal spoke, his voice was chilling and seemingly disembodied, echoing with the dry whisper of a tomb that had long been forgotten.[3]

Jergal was unfeeling and excessively formal, never growing angry and always speaking in a monotonous, uncaring tone.[3] In ethos, he was colder and more inhumane than his master, sanctioning the use and creation of undead by his followers, provided they served the cause of advancing death in the world. He was not evil or malicious, but impassively recorded the death of all things. Loyalty to the office of death was part of his very being, and he would undermine the deity currently holding the position if they did not stay true to their responsibilities.

Jergal often wore a lightless cloak that seemed to absorb the very atmosphere as it billowed as if it were being blown in the wind, for it was a gateway to the Negative Energy Plane.

Bane, Bhaal and Myrkul inherited most of the portfolios of Jergal when he wearily stepped down from his position and then faded into near-obscurity. The death of those deities left Jergal in the service to Cyric and then Kelemvor; he worked well with Kelemvor, but retained his scorn for Cyric. He spent much of his efforts combating Velsharoon's efforts to prolong life into undeath.

Jergal had a fondness from his time in Netheril as Nakasr for who the once-dead Amaunator was. Their opinions of each other after the Second Sundering and the slight changes to Amaunator's ethos and ideals were unknown.

The church of Jergal is small and secretive, a rigidly organized, almost monastic order of scribes known as the Scriveners of Doom. Based largely in lifeless stone mausoleums and dry, dusty crypts, its members spend their days maintaining and extending vast archives of scrolls listing how sentients under their purview passed away and their destination in the afterlife. Only in Thay, where death is a daily fact of life, has Jergal's church undergone a small renaissance. A handful of Jergal's followers still follow the old ways of the Companions of the Pallid Mask, an order whose members specialized in combating or commanding the undead whose existence was not sanctioned by the church or who had proven to be troublesome.

Clerics of Jergal pray for their spells at dusk, a time of day representative of the end of life. On the last night of the year, Jergal's clergy cease their endless toil for a full night. On this holy night, known as the Night of Another Year, the clerics read every name whose death they have recorded from the scrolls they have carefully inscribed over the past year. With a cry of "One Year Closer!", all the scrolls are then filed, and work begins the next day. The only ritual Jergal's clerics are required to perform is called the Sealing. After recording each and every creature's demise, form of death, and destination in the afterlife, Scriveners of Doom are required to sprinkle a light dusting of ash and powdered bone over their inscribed words to blot the ink and mark another small step toward the world's end. Some seek church-sponsored undeath to allow them to continue their archiving careers. Some clerics multi-class as monks or necromancers.

Jergal is an ancient deity, older than many of the greater gods of Faerûn. In the time of Netheril, he was a greater deity himself, with the portfolios of the Dead, Murder and Strife. With the long aeons, he became bored with his position of power, and allowed for three mortals, known as the Dead Three, to each take up parts of his divinity. Bane assumed the portfolio of Strife, Myrkul the rulership of the Dead and Bhaal the portfolio of Murder. Jergal himself faded from his great stature, and became a seneschal to Myrkul, a position he has kept even after his master perished and first Cyric, then Kelemvor assumed his place.

A depiction of Jergal from the late-14th century DR.

A stature of Jergal from a ruined temple in the Western Heartlands. 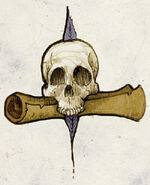 Jergal's symbol from Faiths and Pantheons.