Around −5800 DR, a tribe of human warriors established a small realm in the fertile lands between the forest of Nikerymath (now the Chondalwood) and the shores of the Inner Sea. Led by the warrior-king Jhaam, this tiny kingdom soon conquered the surrounding villages, not as an act of imperialistic expansion, but as a means to secure the realm from attack. Jhaam fell before this establishment was complete, but his heirs were successful in founding the country of Jhaamdath - so named for their famed progenitor - with the great city of Naarkolyth as its capital.

In less than thirty years, the citizens of Naarkolyth began manifesting a new kind of innate mind magic (psionics), which equally expressed itself amongst peasants and nobles. These psions, as the practitioners of the Invisible Art came to be known, were said to be favored of their god, Auppenser. Jhaamdath thus became rigidly organized into a caste society of psiarchs, soldiers, scribes, and commoners, with worship of Auppenser established as the state religion.

In the beginning of Jhaamdath's second century, the country underwent a cultural transformation. The governing oligarchy was supplanted by a psiocracy — a ruling body of powerful psions and psychic warriors known as bladelords. Throughout the next 5 and a half centuries, Jhaamdath expands into a confederation of twelve city-states. The people of Jhaamdath become well-known between the southern reaches of the Sea of Fallen Stars and the Shining Sea for their swordsmanship; this fame forms the basis for calling the confederation by the nom de guerre, the Twelve Cities of the Sword.

In −276 DR, a coup d'état violently dissolves the psiocracy of the Bladelords and a powerful metamind names himself emperor. The now imperial Jhaamdath then aggressively expanded its reach, rapidly moving west and south. The throne also increased its attention on the Sea of Fallen Stars, building up a great naval fleet in hopes of conquering the lands around the sea. While inexperienced sailors, the warriors of Jhaamdath learn quickly, and sink the majority of Westgate's fleet in a naval engagement near the island of Prespur.[3]

Their great expansion and militaristic goals called for more and more wood and the great deforestation of the nearby woodlands. The elves of Nikerymath bravely and desperately fought to defend their forest home, but the military might of Jhaamdath mercilessly slaughtered them in their desire for more wood. Desperate and forced with utter annihilation, the elves turned to Elven High Magic and called forth an enormous tidal wave from the Sea of Fallen Stars instantly destroying all of the Twelve Cities of the Sword.

This tidal wave expanded what was Jhaamdath Bay and reshaped it into the Vilhon Reach (since reshaped even further by the Spellplague into the Vilhon Wilds). Only a handful of towers and keeps situated on higher ground escaped the destruction, though even these eventually sank due to the changed seascape. The only remnants of Jhaamdath that survived untouched were those graveyards and outposts built far from the Twelve Cities.

The basin floor beneath the Vilhon Reach is littered with the ruins of Jhaamdath. Psionic power slowly leaked from the countless number of psionically enchanted magical items and has, over time, slowly corrupted the local flora and fauna creating phrenic monsters. The sunken cities are now inhabited by koalinths, sea hags, and scrags who, along with the depths of the Reach, have thus far prevented most exploration.[4][5]

Since, however, much of the Vilhon Reach has dried up and resurfaced due to the ravages of the Spellplague, much of the previously lost wonders of the Twelve Cities of the Sword are again accessible... if one is willing to brave the monsters that have since taken over, as well as the dangers caused by the nearby Plaguewrought Land.[6]

The ruins of Naarkolyth, the imperial capital of Jhaamdath, have never been found by any underwater exploration, but legends of the capital city yet persist. Every few years, on a moonless night, a phantom city of stone slowly appears in the air floating above the waters of the Vilhon Reach. At sunrise, the city simply fades away. Sages for centuries have been at a loss to explain the city’s strange appearances, the last of which occurred in the Year of the Unstrung Harp (1371 DR).

The phantom city is inhabited only by a single, huge, cloudlike undead creature, thought to be formed from the psychic residue left by th city’s sudden destruction. This tormented entity is believed to be a Caller in Darkness[7] of immense size and power. Its form shows not merely dozens, but thousands of human faces, all screaming out silently in horror and anguish.

This ghost city has yet to be explored, perhaps because no one even knows whether its streets and structures are substantial enough to permit exploration.[8]

After the fall of Jhaamdath, the nobleman Dordrien led a group of survivors north across the Sea of Fallen Stars where they founded a town on the site that would later become Daggerdale. On the western slopes of the Dagger Hills, Dordrien built a keep to guard his people, enduring for more than a century before orc raids left it in ruin.

Few traces remain today of this desperate Jhaamdathan settlement. The crumbling foundations of the keep are, however, still visible on a barren hilltop, and only 2 miles (3.2 kilometers) north, the crypt of the Dordrien family can be found.

The Dordrien crypt is built from limestone caverns beneath the Dagger Hills. Natural tunnels in the caves lead to the drow outpost of Szith Morcane. Drow refugees from Maerimydra used the crypts as a staging ground for surface raids until adventurers hired by Randal Morn, ruler of Daggerdale, put an end to that. Now, the crypts are home to a number of undead Jhaamdathan royalty, and a nest of bebiliths left behind by the drow of Szith Morcane.[9]

The port city was built on a hilly region 10 miles south of the Eyes of Silvanus. It was well known around the Sea of Fallen Stars for its robust trade with those coastal kingdoms. When Jhaamdath fell, Jhouram’s hills served to protect much of the city from most of the force of the tidal wave. However, the changed seascape of the area caused those sections of the city that were saved to eventually sink, though they remained mostly intact.

What was left of Jhouram is now overgrown with barnacles and ropy sea plants. A sea hag witch-queen, along with two green hags, now rule over the sunken city, served by a tribe of kapoacinths. The hags' minions have since recovered a vast wealth of gold, gems, and psionically-charged magical items from city’s vaults and armory.[9]

Powerleech: A magical effect to which melee weapons could be enchanted. A weapon with this ability drains psionic power from the foe struck and transferred it to the wielder. Powerleech weapons were highly popular amongst the bladelords.[10]

Nimblestep: The name for a small number of short swords with psionic enchantments. It is thought that these blades originate from the ruins of Corrant.

A psionicist wielding a nimblestep can focus their mind quicker than normal, while also gaining the ability to run up walls, and jump much farther than he or she would be able to otherwise.[11]

Note: All dates are on the Dalereckoning scale.

–5800 Jhaamdath is founded north of the Chondalwood, as human settlements unite under the psionic warrior Jhaam, scion of the Dath Dynasty.
–5750 The First City of the Sword, Naarkolyth, is founded.
–5730 Auppenser, through the psion mystic Laszik Silvermind, delivers to Jhaamdath his plan for the country's prosperity. The first divine precept of this plan, the outlawing of slavery, is quickly enacted.
–5725 Laszik crafts the first udoxias, a powerful psionic artifact in the city of Naarkolyth (not one of the Twelve Cities of the Sword). Those with psionic abilities who mentally touch the udoxias are granted access to greater power. The effect of the udoxias is felt for miles beyond Naarkolyth, and many of the country's citizens begin making pilgrimages to the capital city.
–5710 Laszik founds the Udoclian, a university for the study the Invisible Art, in Naarkolyth.
–5700 Jhaamdath replaces its oligarchic government in favor of psiocracy.
–5690 Laszik Silvermind, now elderly, mysteriously vanishes from the Material Plane. It is believed that he ascended, bodily, to serve at Auppenser’s side.
–5600 The Second City of the Sword, Porrenath, is founded.
–5500 The Port City of Jhouram joins Jhaamdath as the Third City of the Sword.
–5425 The Fourth and Fifth Cities of the Sword - Gharrent and Golmuth, respectively - are founded.
–5330 Lirremar (the ruins on which Hlondeth is built) becomes the Sixth City of the Sword.
–5250 The twin cities of Tuoxent and Hollinth are inducted as the Seventh and Eighth Cities of the Sword.
–5032 The armies of Mir and Jhaamdath battle, starting the Mir–Jhaamdath War. Mir suffers a devastating loss.
–5007 Coramshan and Mir becomes allies in opposition to the threat of Jhaamdath.
–5005 Coramshan and Jhaamdath declare a truce while also abandoning their claims to the Lake of Steam. Mir and Coramshan merge to form a new country, Calimshan.
–4850 The Ninth City of the Sword is founded, Jhirrent.
–4620 Inixrien becomes the Tenth City of the Sword.
–4470 Jhaamdath’s Eleventh City of the Sword, Corrant, is founded.
–4230 Mirrindith the Last becomes the Twelfth City of the Sword.
–2381 Beholders plague the outer colonies of Jhaamdath and Calimshan around the Alimir Mountains.
–1603 The noble families of Jhaamdath construct the magical refuge of Dhinnilith, a secure pocket plane accessible only through the palace at Naarkolyth.
–276 Year of Overflowing Casks: A violent military coup sees Jhaamdath's psiocracy of bladelords replaced with a militant emperor. A great navy on the Inner Sea is built, and the increasing need for wood sets the Jhaamdathan military to the slaughter of the local elves of the Chondalwood over the next twenty years.
–255 Year of Furious Waves: Elven high magic calls forth an enormous tidal wave, utterly destroying Jhaamdath.
144 Year of the Fear and Flame: Chondath is founded on the ruins of Jhaamdath.[12][9] 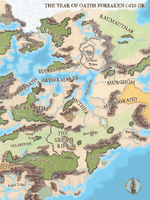 Retrieved from "https://forgottenrealms.fandom.com/wiki/Jhaamdath?oldid=652692"
Community content is available under CC-BY-SA unless otherwise noted.